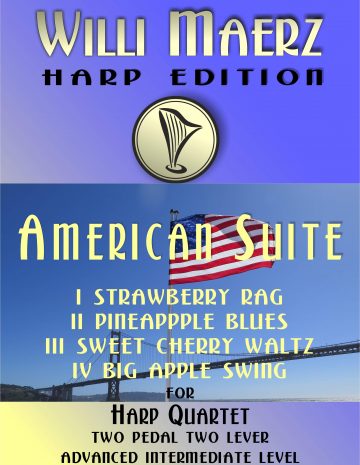 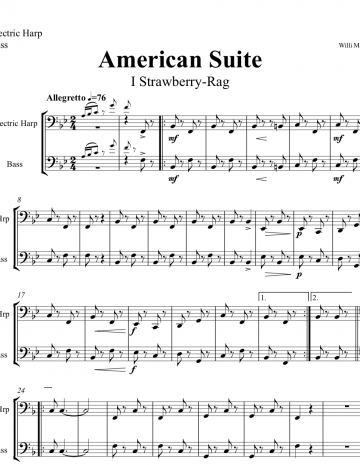 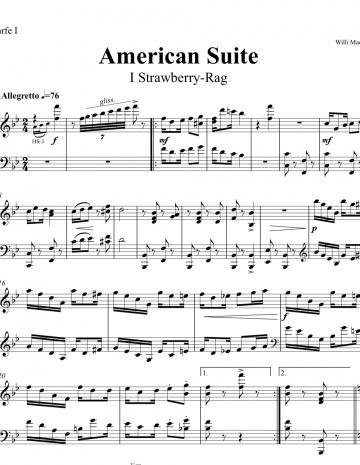 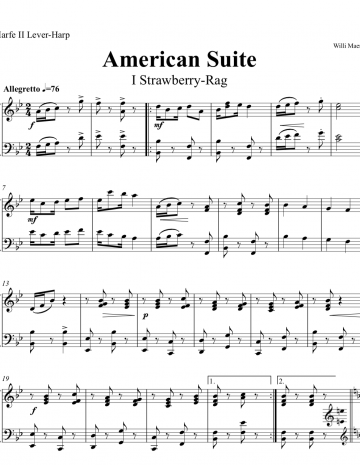 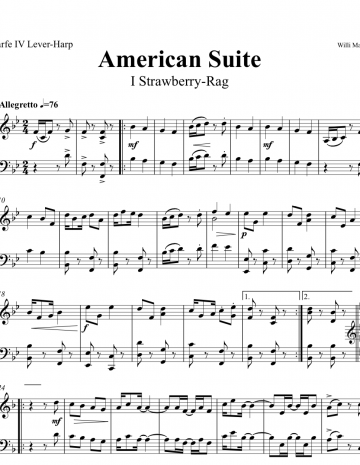 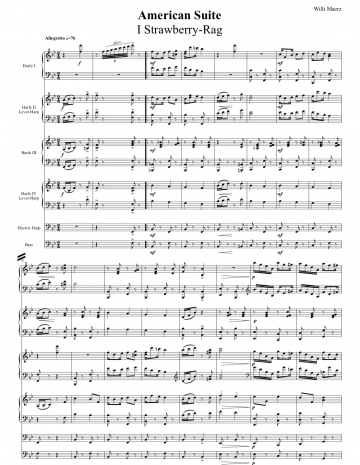 Willi Maerz’s American Suite is for four lever and pedal harps with optional electric harp or bass. (Harps 2 and 4 can be played on lever harp, while Harps 1 and 3 require pedal harp.). You may also purchase the American Suite‘s four movements separately (“Strawberry Rag,” “Pineapple Blues,” “Sweet Cherry Waltz,” and “Big Apple Swing“). Scroll down for notes from the composer and to listen to individual movements. See also duo version. Click here to download free practice-along audio files for each part!

Ragtime is a style pioneered by Scott Joplin. And many new Ragtimes composed today still follow in the tradition of this outstanding American composer. This tradition is defined by catchy melodies, clearly structured harmonies, and, often, a surprising and humorous twist. One of Scott Joplin’s central tenets regarding ragtime tempo needs to be mentioned here: never play a ragtime fast!

Blues as a musical genre encompasses a vast wealth of variety. Certainly one of the most expressive styles of music, it has inspired and inspires many artists to this day. Pedal slides, a feature of the harp, are a perfect way to produce the signature “blue notes“ of Blues music, and they make the harp surprisingly well suited for the genre. This piece also features, among other things, the unique special effect created by strings plucked with the fingernails.

The Jazz Waltz is America’s very unique, and truly original, answer to the traditional European ballroom dance. As opposed to the classical Waltz, the Jazz Waltz features a continuous “walking bassline” consisting of quarter notes. Along with the secondary accompanying chords, the walking bass brings a cool and casual character to the Jazz Waltz. With its cheerful melody and syncopations, the “Sweet Cherry Waltz” follows the Jazz Waltz patterns and includes rhythm highlighted by clapping.

More than any other style, Swing represents the USA in music. During its heyday, the “Swing Era” of the 40s and 50s, Swing music was the expression of a lifestyle. The Big Apple Swing makes use of a variety of effects, techniques, and percussive elements, and it takes my American Suite to its spectacular finale.