“It’s not about the ego,” says Jenny Ogan about therapeutic music, “it’s not about virtuosity, it’s about focusing on one person, connecting with that person and using music to do something good for them.”

Editor’s Note—In our Practice Makes Harpist series, we are following nine harpists over the next several years to see how their practice evolves and shapes their musical experience. This installment takes us to Boston, Massachusetts, where Jenny Ogan is working through the last 20 hours of the Music for Healing and Transition Program.

Age: 42
Area of Study: Therapeutic music
Long-term goal: Establish a non-profit to promote the use of therapeutic music in healthcare.
Short-term goal: Complete an independent practicum to become a Certified Music Practitioner.

During her childhood, Jenny Ogan remembers listening to her friend’s mother, the principal harpist for the Cleveland Orchestra, practicing while she and her friend played. Ogan longed to play the harp, and, after years of begging her parents, she finally began harp lessons as a high schooler. During her college years Ogan moved away from music, finding the harp again when she began a family with her husband in the Boston area.

While working for a think tank, Ogan wanted to volunteer at hospice, and playing her harp seemed a logical way to offer her help. When she reached out to a therapeutic harpist, Ogan was told, “Please don’t volunteer because it just makes it harder for everyone who’s trying to do this as a profession.” Soon afterwards Ogan saw a job opening at a hospice and applied to see if she would like the work. “I loved it,” she says. “It just felt so right and wonderful.”  When Ogan’s daughter started elementary school, Ogan suddenly had time open in her schedule. Her harp teacher suggested she enroll in a local therapeutic music program. The time was right, so she took the plunge.

As part of the therapeutic harp certification program, each musician develops their own mobile playing kit. Building on what other harp therapists have developed, Ogan puts her Thormahlen Ceili harp on a wheeled Music Makers platform. A harp desk attaches to the column of the harp acting as a music stand, creating a contained mobile setup.

Through the Longy School of Music of Bard College, Ogan started studying to become a Certified Music Practitioner with the Music for Healing and Transition Program. The program is for all instruments. In her cohort, there were musicians who played the harmonica, viola da gamba, and keyboard.

“We have a special program here,” Ogan says. “It’s in the conservatory, and the caliber of the musicians is quite high, making an exceptional community. The focus is on learning therapeutic music, which isn’t just entertainment. We learn to assess and truly listen to the patient, and then play the appropriate music for that person at that moment in time. So if somebody is acting very stressed and looks like they would benefit from relaxation, you could perhaps play some rubato flowing music. If somebody needs stabilization, you could play something with a very strict meter. For people who are near death there are other types of music to play, some that might not even sound like music to another’s ear.”

One of the program’s requirements is 45 hours of practical training at multiple locations in the health care sector with a variety of patients.  Each musician decides the ideal length of their playing shift. Ogan says, “I know people who are doing four-hour shifts. Others prefer an hour, but two hours is good for me.”

During the two hours, an average session with a patient will last around 20 minutes, sometimes longer.

The work itself is physical, moving the harp from room to room, and mentally the musician needs to be very present and aware of the patient they are playing for.

During her training, Ogan has had some intense experiences, like when she played for a patient with schizophrenia. “Somebody warned me that I needed to be ready to bolt because he could be aggressive,” she recalls. “However, I went in and asked if he wanted music. When I started, [his]  anxiety went away and we created this moment of quiet. He just really liked it and was totally focused and smiling.”  As she played, the patient visibly relaxed and engaged with the music. “It’s horrible to be hospitalized with a mental illness. Yet it was wonderful, just to go in and feel like the music, even if it was just for that moment, made a difference.”

Ogan notes that some of her practical experience has been in memory care, where people forget her quickly.  “I would play for someone a second time, knowing what songs they responded to earlier. They’d say, ‘This is the most amazing thing, these are all my favorite songs.’”

Currently, Ogan is collaborating with other musicians to start a nonprofit organization in the Boston area called the Therapeutic Music Foundation. It aims to build support for therapeutic musicians, provide educational materials for the general public, and generate grant money for hospitals that would like a harp program but can’t find the funding.

The nonprofit organization will also create a support system for its members. “One concern of mine personally is how to handle school holidays, or times I can’t work because my daughter’s sick,” Ogan explains. “If you’re a group of people working together, you can cover for each other, and it’s better.”

The instrument that began as a musical backdrop to childhood play has turned into a vocation for Ogan. We look forward to seeing where practice takes her over the next year. • 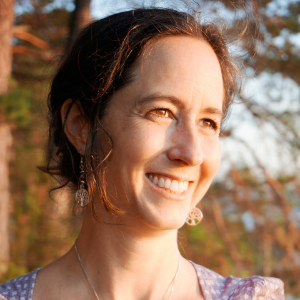 Rebecca Harrisson is a Michigan native who now resides near Oslo, Norway, with her husband, folk singer David Harrisson. She is a freelance writer, harpist, and storyteller. Visit her website at harpstories.com.