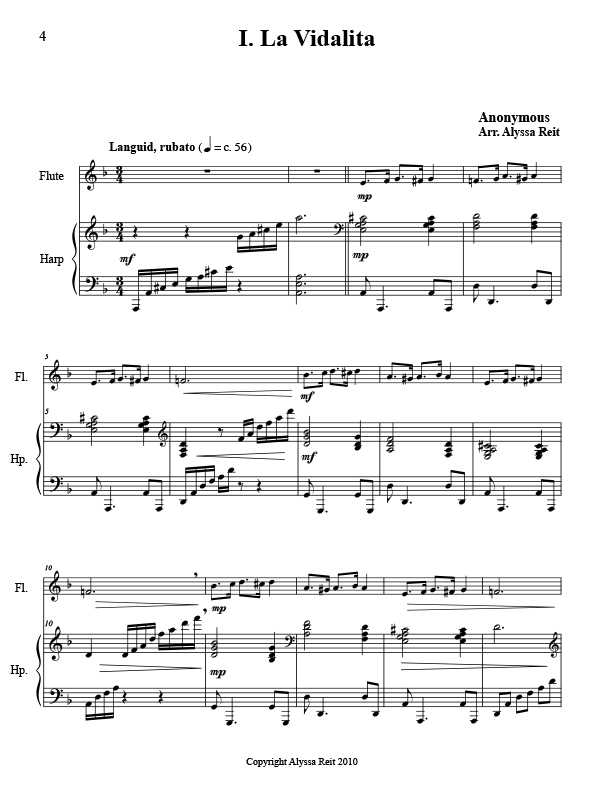 Folk Songs from the Americas (flute and harp version)

Alyssa Reit has arranged her popular Folk Songs from the Americas collection for pedal harp and flute. (Her arrangement of this collection for 2 harps can be found here.)  Included are:

This collection is a PDF download available for $20.00.
(Includes harp score and separate flute part)

About the South American Folk Harp

The Latin American harp tradition flourishes widely through out South and Central America. Although it is popular as a solo instrument, it is commonly an integral part of folk ensembles. The harps themselves are derived from those brought over during the colonial period by the Spaniards. They generally have neither pedals nor levers and have a narrower spacing and much lighter string tension than the modern pedal harp.

“La Vidalita” is a gaucho song, popular in both Uruguay and Argentina. The gauchos are cattle herders, said to exclaim “vidalita!” —a word that expresses their range of emotions. The words of the song ask why the dove grieves, answering that he grieves because he is always roaming, and so grieves the gaucho, whose ideals will never be realized. (Source: The Fireside Book of Folksongs, Simon & Schuster, NewYork, NY 1947)   Las Tres Damas is a joropo, a musical style and dance resmbling the waltz. The word “joropo” originally meant “party,” which conveys the spirit of the music well. The joropo is usually played with a group of musicians, including bandoloa, cuatro (both stringed instruments resembling the Spanish guitar), harp and maracas. The flavor is always quite lively and rhythmic, with alternating 3/4 or 6/8 meter, full of polyrhythms and hemiolas. (Source: Wikipedia Online Encyclopedia)