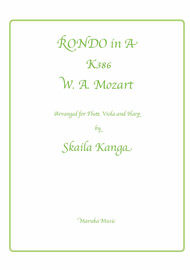 Skaila Kanga has arranged Mozart’s Rondo in A, K386, for Harp, Flute, and Viola trio. She describes it as “a great happy piece to open a chamber concert.”  Read the product description below for more notes on the piece.

This arrangement is available as a PDF download in the following combinations:

This Rondo dates from 19th October 1792 and may have served as the original or substitute finale to the Piano Concerto K414. It was omitted from the subscription and printed versions of the piece probably because the accompaniment could not be played ‘a quattro’. The autographed score first lived in Berlin, later in Cracow’s Biblioteka Jagiellonska, but now fragments can be found in London, New York and private collections in England and Japan. Cipriano Potter made a two-piano version in 1938.

In the last hundred years, especially after Debussy composed his Sonate for flute, viola and harp in 1915, there has been an abundance of works written for this combination. Notable names include Arnold Bax, Harrison Birtwhistle, Henk Badings, Paul Ben Haim, Jean Michel Damase, Maurice Durufle, Sofia Gubaidulina, Phillipe Hersant, Andre Jolivet, Ami Maayani, William Mathias, Per Norgard, Walter Piston, Alan Rawsthorne, Toru Takemitsu and more recently, Sally Beamish, Rhian Samuel, Richard Bissill and Gareth Wood. There have also been many transcriptions of early baroque, classical and impressionist works fuelled by the development of the modern concert harp and the appetite of the rising generation of brilliant young players eager to extend the harp’s repertoire.

It is for this very reason that I embarked on this transcription, as Mozart’s Concerto for Flute and Harp almost stands alone in popularity amongst audiences! Following the success of the Concerto K414 transcription for harp, I was led to this delightful Rondo, a fitting opening to any chamber recital. There are two cadenza moments for which there are no originals composed by Mozart. I have therefore suggested one for harp alone and the other ‘en trio’, however the performers are at liberty to compose their own cadenzas. The dynamic markings are taken directly from the urtext version. The works lasts approximately nine minutes.

Be the first to review “Rondo in A” Cancel reply