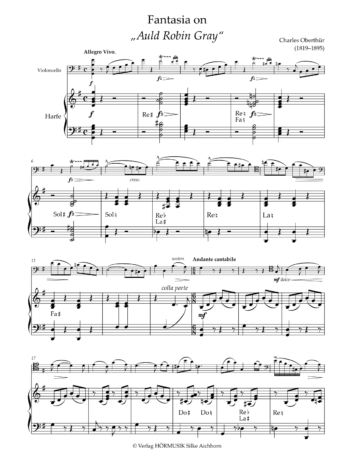 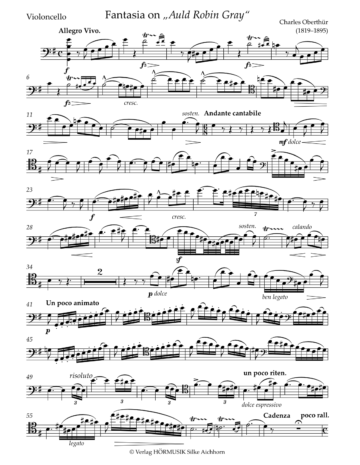 Silke Aichhorn has created this edition of Charles Oberthür’s pedal harp and cello Fantasia “Auld Robin Gray,” a melody original composed by William Leeves. A work with a lengthy history, the music is romantic, passionate, and touching! Scroll down for more notes from the arranger.

This piece is available as a PDF download for $16.00.
(Includes harp score and cello part in one file.)

Pages to print: score and parts file is 9 pgs.

Charles (also Karl) Oberthür (1819-1895), born in Munich, was a harpist and composer. After positions in Zurich, at the Court of the Duke of Nassau in Wiesbaden and in Mannheim, he went to London in 1844. From 1847–48 he went on a concert tour all across Europe. In 1861, he became professor of harp at the Academy of Music in London. His compositional oeuvre includes over 350 works, most of which are for harp.

“Old Robin Gray” is the title of a Scottish ballad. It was written by the poet Lady Anne Lindsay in 1772. Robin Gray is a kindly old man who marries a young woman who is already in love with a man named Jamie. Jamie goes to sea to earn money so the couple can marry. The protagonist of the ballad is sad that she is forced to marry Robin Gray due to the misfortune of her parents while her lover is away. Robin Gray promises to care for her and her parents if he receives her hand in marriage in return. Jamie returns several weeks after the wedding and looks as pale as a ghost. The lovers meet again full of sorrow, they kiss and have to force themselves to separate. The woman decides to do her best to be a good wife to Robin, although she is in despair because of the loss of her true love. The original melody was composed by Rev. William Leeves. George Thomson commissioned Joseph Haydn to arrange the ballad for piano and soprano as well as for piano, violin, cello and soprano. Oberthür arranged the work for cello and harp.