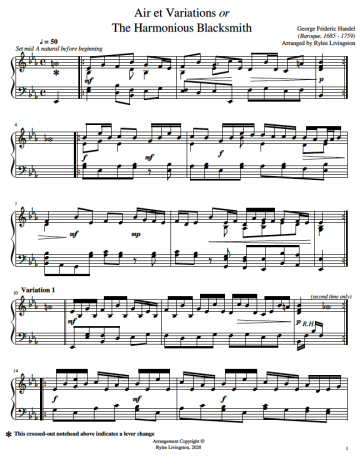 Add to Wishlist
What are you looking for?
Holiday Favorites

This arrangement of the classic Baroque piece, originally written for harpsichord, is best suited for advanced lever harpists at or around RCM Grade 9 Level. While this piece is playable on pedal harp, there are no pedal markings included.

This piece was originally written by Handel in 1720 as part of his Suite no. 5 in E major for harpsichord. As the legend goes, Handel was walking by a blacksmith shop when he heard a tune being sung by the blacksmith. He liked the tune very much, and it became the basis for the theme and variations in this piece. Of course, this story is merely legend, but it gives nice imagery when playing the piece!

The repetition of the note B (most noticeable in Variation 1) is said to evoke the sound of the blacksmith’s hammer hitting the anvil.

In arranging this piece for lever harp, I hope that more Level 9 harp students are inspired to play it, and that they can play it from an easily-readable, modern arrangement.

Be the first to review “The Harmonious Blacksmith” Cancel reply