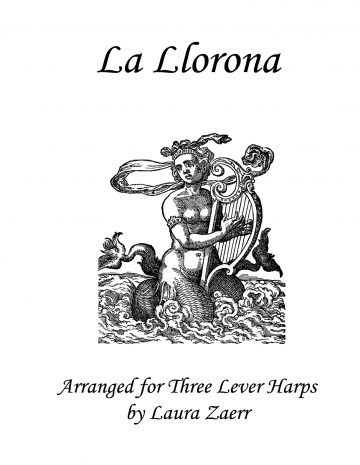 Laura Zaerr has arranged the traditional Mexican folk melody “La Llorona” for three lever or pedal harps. (Harps 1 and 2 are more challenging than Harp 3.) “Tremelos, harmonics and a couple of tricky cross- rhythmic passages paint a delicate landscape for this timeless melody,” says Zaerr. Although the piece is marked for lever harp, it can easily be translated to pedal harp.

The legend of La Llorona originated in Mexico. The original story tells of Maria, a beautiful woman who killed her children by drowning then so that she could be with her lover. Not so bad. But the problem really started when he subsequently rejected her. Not so bad. But when she reached the gates of Heaven God asked her, “Where are your children?” she replied, “I don’t know, Lord.” So she was denied admission to enter heaven until she finds her children. Therefore she continues to wander for all eternity, searching in vain her lost ones. So she has the name La Llorona, The Weeping Woman. This story is used as a cautionary tale in Latin countries. Mothers frighten their children so the y won’t stay out late or wander off, especially close to a river. La Llorona might kidnap them.

Be the first to review “La Llorona” Cancel reply