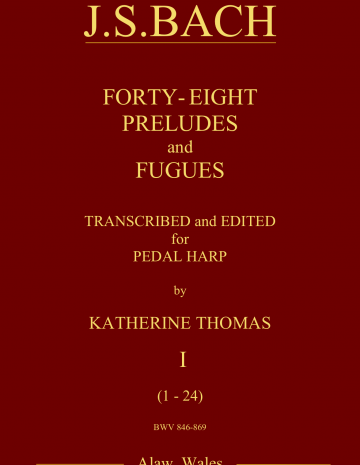 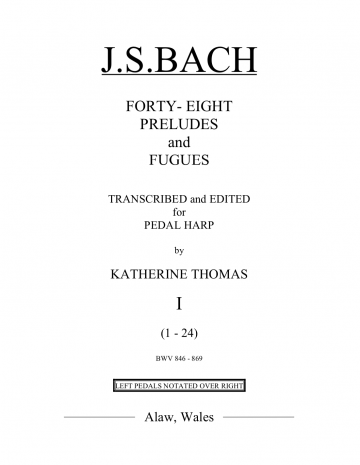 Katherine Thomas has arranged J.S. Bach’s entire Forty-Eight Preludes and Fugues (Book 1) for solo pedal harp. This cornerstone of Western music is ideal for performance or study and reference. Here is an opportunity for harpists to immerse themselves in the genius of the composer while providing a substantial source of repertoire. Scroll down for contents.

This collection is a PDF download available with two pedal notation options (please choose the one that works best for you):

I was introduced to the world of Bach at the age of fourteen, having to study the second Prelude and Fugue for a piano examination. It wasn’t exactly a love affair. Taking me almost two years to learn the notes, it was some time before I tackled any Bach again.

Through Grandjany’s transcriptions, a visit to the Hochschule in Munich and, in particular, a masterclass on unaccompanied Bach with a cellist, my eyes have since been opened to this astounding world – full of melodic and harmonic complexities and intrigue.

This edition of the Well-Tempered Clavier is not meant to be a book-end on your music shelf, rather it is meant to challenge and inspire. Bach has provided the best workout for me during the past months with its dextrous fingerwork and, on occasion, lightning footwork!

My vision in tackling this masterpiece of Western Culture, while making it completely accessible to harpists, was always to produce a book where the music of Bach would shine. Quite remarkably, especially due to its chromatic nature, very little editing was required: the music transfers very well to the harp. Very few compromises have been made (usually where notes are shortened in order to change pedals) but on the whole, I have remained as faithful as possible to the original.

Enharmonics have been realised and all pedal markings notated. Owing to the extensive chromaticism in this work, particular attention has been given to the placing of pedals – positioned specifically to avoid hearing any notes changing; damping signs for specific notes have also been indicated. At first glance, they may look quite daunting, but will fall naturally with finger-placing on the strings. Note that the symbol before a pedal change indicates that it is a right-side pedal to be played with the left foot.

Musical fashions dictate – and evolve: this edition has been prepared so that each individual can create his or her own unique interpretation.