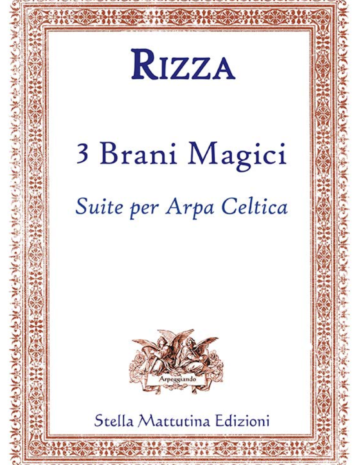 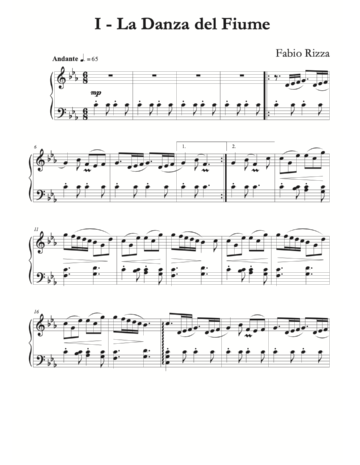 Fabio Rizza’s “Three Magical Pieces” is for solo lever or pedal harp. This collection includes three pieces that “are inspired by the nature and typical landscapes of my motherland: Sicily,” says Rizza. Scroll down for contents and more notes from the composer.

This collection is available as a PDF download for $15.00.

The “Three Magical Pieces” for Celtic harp, although contaminated by the presence of folkloristic Northern European figures, are inspired by the nature and typical landscapes of my motherland: Sicily. I paid particular attention to the sceneries of the southeastern coast with its rivers – hidden in the depths of the earth – which smash the rocks, while on these very rocks small fragrant thorny stems, typical of the Mediterranean scrub, often grow.

This apparently bucolic atmosphere becomes unsettling because of some nature spirits, neither good nor evil, who are once again connected to Sicilian folklore: they are “truvaturi” spirits (the “truvaturi” are hidden treasures in haunted places, caves and ravines).

“The Enchanted Mill”, second movement in this suite, hides the primal idea of this whole work. It is inspired by one “truvatura” short story my grandmother Giovanna used to tell me when I was a little child:

“Thanks to a magic candle’s wax, a mother and her daughter could evoke little spirits who ripped open the mill’s floor where they worked, thus creating an opening towards an antique treasure. One night the daughter, eager of wealth, decided to light the candle and go down alone to the secret place, so as to reach the treasure and take it with her. The candle’s wax, however, melted quickly, the floor closed and the girl was trapped in the depths forever”.

The “Three Magical Pieces” are illustrated by the artist Miriam Viola. Every piece of the suite is introduced by one of her works.

Be the first to review “Three Magical Pieces” Cancel reply