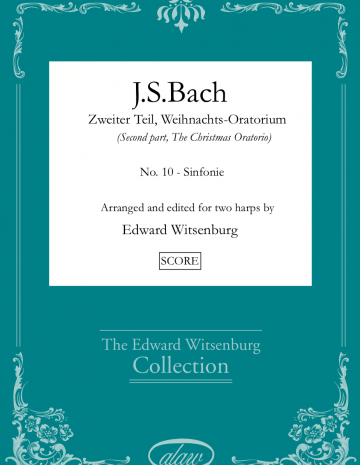 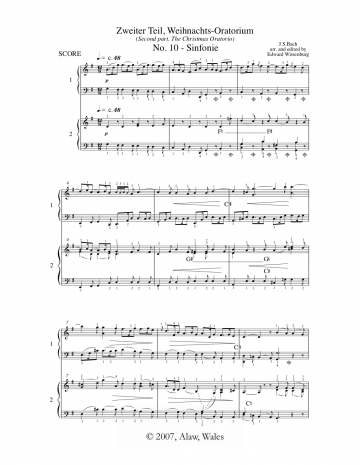 Arranged for two pedal harps by Edward Witsenburg, the “Sinfonia” no. 10 opens part two of J.S. Bach’s Christmas Oratorio. With its pastoral atmosphere and peaceful rhythmic swing, this music is ideal for church, performance, background music, and functions, or for study and reference.

This piece is available as a PDF download for $20.00 (includes score and both parts).

Johann Sebastian Bach composed his Weihnachts-Oratorium (Christmas Oratorio) during the time he worked in Leipzig as “Director Musices” and Cantor at the St. Thomas School (1723 – 1750). The work consists of a series of six church cantatas to be performed on six festive days between Christmas and Epiphany. The first performance of this monumental composition, celebrating the birth of Christ, took place between December 25th, 1734 and January 6th, 1735.

The “Sinfonia”, with its pastoral atmosphere and peaceful rhythmic swing, is the opening number of part two. Scored originally for string orchestra and several woodwinds, I have transcribed this well-known part of the oratorio for harp duo.