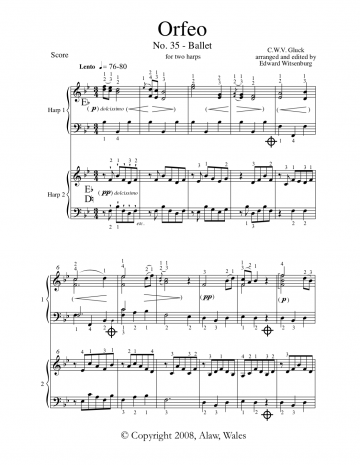 Edward Witsenburg has arranged the “Ballet” no. 35 from Gluck’s opera Orfeo for two pedal harps. The story of Orpheus, the legendary singer and lyre player with magical powers, is a very poignant one – this ballet movement is an interlude, displaying simplicity and grace and is well expressed by two harps. Scroll down for notes from the arranger.

This piece is available as a PDF download for $16.50 (includes score and two parts).

The story of the legendary singer and lyre player from ancient Greece, Orpheus, whose music-making had magical powers, has constituted a frequently used theme in music, in literature as well as in painting. It inspired many composers since the Baroque era, with Monteverdi and Gluck in the lead.

Orpheus descends into the Underworld, trying through his incomparable art to retrieve his beloved wife, Euridice, who died young as a result of a snakebite. His fervent wish is indeed granted, on condition that he does not look back at Euridice during his journey through the Underworld until he once again reaches the light of day. At one point Orpheus ignores the will of the gods, turns around to look at his wife and loses her for the second time.

Christoph Willibald von Gluck (1714-1787) wrote his opera “Orfeo ed Euridice” in 1762. From the start the work has been highly successful, and moreover has borne the test of time.

The “Ballo” may be found in the second act of the opera, when Orpeus has entered the heavenly Elysian fields, after having placated the relentless Furies with the enchantment of his singing. The atmosphere of the ballet is suffused with a feeling of peace and harmony, also to be observed in the performance of the transcription for two harps.