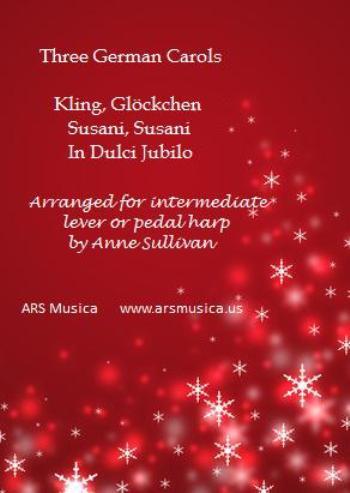 Anne Sullivan has arranged three German carols in this collection for lever or pedal harp. There are no lever or pedal changes in any of the arrangements. They are ideal for students or for any holiday performance. They can be played as a set or singly. See the Product Description below for more information.

This collection is available as a PDF download for $9.95.
(Purchase this collection as a set with Three English Carols for $15.00. See the set.)

“Kling, Glöckchen,” or “Ring, Little Bell”, is a favorite Christmas carol of German children. The lyrics were written in the 19th century and set to a traditional German folk tune. I have included two versions of this carol arrangement. One has no lever or pedal changes, but the melody has been slightly altered to allow this. The other version has the correct melody but requires some pedaling or skillful levering. Watch Anne Sullivan play “Kling, Glöckchen”:

“Susani, Susani” is also known as “Vom Himmel hoch, o Engel kommt.” It is one of the oldest, and in my opinion, loveliest German carols, dating back to the 14th century. It has a sweet and gentle rocking rhythm like a cradle song. Watch Anne Sullivan play “Susani, Susani”:

This carol is more familiarly known as “Good Christian Men, Rejoice.” The words and the tune both date from the 14th century. The text is credited to Heinrich Seuse who, in a vision, danced with angels who were singing these words. Watch Anne Sullivan play “In Dulci Jubilo”:

Be the first to review “Three German Carols” Cancel reply