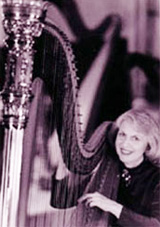 The first time I met Joan Ceo was in a Hartford Symphony rehearsal, for which I had been hired to play second harp for Petroushka.

I had only heard tidbits about Joan from my teacher, Phyllis Wright, who preceded her as principal harpist in Hartford: the harp Joan had reputedly rescued from a dumpster and had rebuilt; her reputation as an Angelaire; her beautiful house, converted from a church, where the harp sat on the altar; and her husband Joe, a violist, conductor, and pilot, into whose Cessna 206 they would load Joan’s harp when they needed to travel to a gig.

The warmth of her welcoming smile made me feel as if I were sitting in the cozy living room of an old friend, rather than at the first rehearsal of a daunting piece with a professional orchestra. It would feel that way for the next 20 years, each time we played together in Hartford.

Faithfully driving the 90-minute commute from Westerly, she never failed to arrive in Hartford well over an hour before any rehearsal or performance. She would then follow a methodical progression of tuning, warming up, and playing entirely through her parts for the program. Joan’s relaxed and confident approach always indicated the depth and entirety of her preparation for any concert. Moreover, she had often researched the history of the piece, the composer, and other pertinent details about her repertoire. According to her husband Joe, it was Joan’s teacher, Sylvia Meyer, who taught her to expand her knowledge well beyond that of just learning and playing a musical piece. Her clear, efficient notations, featuring a harpified “H” with an arrow at either the bottom or top, indicated both when to pull the harp back, and when to put it down. Each one of Joan’s parts held an inscribed list of every performance, including organization, conductor, and month and year in which she had performed it. She was unequivocally supportive of fellow harpists, her students, and her colleagues, and playing second harp to her was delightful and inspiring. From time to time she sent me articles and recipes, or a duplicate picture of us from a recent performance. We both giggled over a satirical Martha Stewart book she gave me as a wedding present. Joan’s Angelaire colleagues, Ruth Papalia and Jude Mollenhauer, describe “Joannie” as warm, nurturing and always upbeat, especially in challenging times of traveling on tour. She had a special way of easing the crankiness out of anyone, even Matty, their bus driver on tour, with her bubbly laughter, a fist in the air accompanied by “Carry on!”, and her positive, warm disposition.

Joan’s husband of 53 years, Joe, speaks of his deep love for her. His attraction to Joan upon meeting her at Catholic University was for her intelligence, warm personality, and good looks. They performed as a harp and viola d’amore duet (and sometimes a trio, adding flute), all over Europe, from Norway to Italy. In the U.S., they were regulars at the Kennedy Center in Washington D.C., for the annual run of The Nutcracker. They shared a love of music and gardening, and the Dutch Butter Cake and Peanut Butter Balls she was known for were apparently memorable at church and among students.

Joan taught many students throughout her life, at the University of Rhode Island, and in private studios in Kentucky and Rhode Island. Harpist Cathy Andersen remembers Joan as an inspiring teacher with a “strict but nurturing teaching method.” Kay Kemper, only having studied with Joan for five months, easily became a lifelong friend, making annual visits to Joe and Joan. She lovingly corroborates that Joan made her take her gum out of her mouth during a lesson and wear it on her nose. Kay fondly remembers the experience of playing second harp to Joan as an adult, addressing her as Mrs. Ceo. Joan smiled, looked her directly in the eye, and said, “Kay, you are an adult, a fine harpist, and a professional. Call me Joan.” •

We are sad to report that harpist Joan Ceo died on January 7 at age 80. Joan began harp study at age 8 with William Cameron of the U.S. Navy band and later studied with Sylvia Meyer of the National Symphony. She also studied with Carlos Salzedo and toured for two years as a member of the Angelaires harp quintet. Joan performed with orchestras throughout the Eastern seaboard and was Principal Harpist with the Hartford Symphony for 29 years. She also performed with the Connecticut Opera and the Washington Ballet Orchestra, and served on the faculty at the University of Rhode Island.

Read Joan Ceo’s full obituary from The Westerley Sun. Donations can be made to Christ Church, 7 Broad St, Westerly R.I. 02891.