"…she uncovers deeper layers, details, nuances, and the always unexpected." 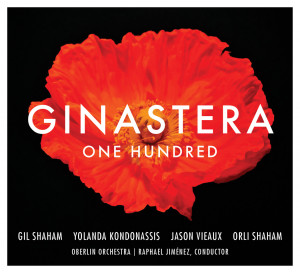 To harpists…Alberto Ginastera was much more than a leading force in contemporary music. He wrote our piece. He created the work that pushed the harp out of its box and gave us the kind of indelible, substantive composition that makes or breaks a solo career like mine.” Yolanda Kondonassis wrote this in the program booklet of her latest CD that celebrates the 100th anniversary of the birth of an often under-celebrated composer, a man she thanks for sparking her musical journey—one that has become a celebrated career.

Alberto Ginastera is noted as the greatest South American composer of the 20th century, but in this spectacular recording, Ginastera: One Hundred, Ms. Kondonassis—and her performing colleagues—make the excellent argument that he should be counted among the top composers in the world.

There is a special gift in Ginastera’s talent to take his native music—the dances of Argentina—and meld them into a new language that is classical, modernist, and listenable all at once, something Ms. Kondonassis calls a kind of musical miracle. In spite of her having played Ginastera’s harp concerto over 200 times, she says every time she looks at the score, she uncovers deeper layers, details, nuances, and the always unexpected. She considers it a gift to her as a musician to always be challenged and delighted—but this turns out to be our gift, as her interpretation is so revealing and exciting. In the process of putting together this recording, Ms. Kondonassis met Ginastera’s daughter Georgina, who pointed out that her father did not compose quickly. Rather it was a painstaking process. He didn’t search for things, he found them. There is a sense of a shared discovery in the performance. From the first punchy rhythms in the orchestra and the harp’s staccato response, we are held in thrall and wouldn’t dare turn away our attention. Ms. Kondonassis possesses a beguiling tone that shifts in and out of light—like painted colors in a moving picture claiming our imagination, so pungent, we can see the sound.

Equally thrilling on this CD are the performances curated by Ms. Kondonassis, who serves double-duty as the album’s executive producer. Sister and brother pianist and violinist, Orli and Gil Shaham, venture into the world of Ginastera that, in some ways, fits our most basic concept of the composer and his love for the music of the “Cowboys of the Pampas,” the gauchos. In 19th century Argentina, the gauchos were idealized in literature as brave, nomadic, and ruggedly individualistic in their near constant conflicts with civilization. You could say that Ginastera captured this spirit in much the way Copland did for the American West. In Pampeana No. 1, as well as Danzas Argentinas for solo piano, Ginastera uses the “gaucho chord” built on fourths, much like the tuning of a guitar. The Shahams play with a kind of crisp ecstasy that flirts with the edge in the more complex rhythmic passages—and then it’s all elegiac and nostalgia for wide, open spaces in the slower passages. Guitarist Jason Vieux adds another layer of joyous spirit into this scintillating music. Colorful, committed, and intimate, this is one of the most delightful albums I have heard.

Credit should be also given to the superb recording quality and the very natural re-creation of sound by Paul Eachus and Lawrence Rock as well as the fascinating academic notes by James O’Leary. And of course, the artists of tomorrow, the Oberlin Conservatory Orchestra, plays at an exceptionally high level.