An interview with Osian Ellis
Interviews

By Alison Reese on April 30, 2018 0 Comments
An interview with Osian Ellis 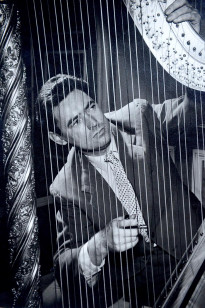 Osian Ellis during his early career was a frequent soloist, in addition to his orchestral work. 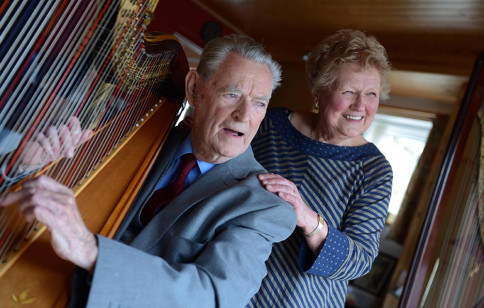 Osian with former student Elinor Bennett, who honored Ellis for his life’s work and contributions to the harp at the 4th Welsh Harp Festival in April, just after Ellis’ 90th birthday.

Osian Ellis recently marked his 90th birthday, and he was aided in the celebration by scores of well-wishers. He was not just cheered for living nine fruitful decades, which is certainly reason enough to be lauded, but also for his profound musical contributions to his homeland and beyond. Ellis, a national treasure in Wales and a living legend in the harp world, was honored with a concert dedicated to him at the 4th International Welsh Harp Festival last month in Caerarfon. Elinor Bennett, the Festival’s organizer, was a student of Ellis’ and wanted to pay tribute to his immense musical achievements.

Ellis was principal harpist with the London Symphony for much of his career. For 30 years he taught at his alma mater, the Royal Academy of Music in London, where he succeeded his teacher, Gwendolen Mason. It was his close association with composer Benjamin Britten, though, for which Ellis is probably best known. He met the British composer in 1960, and their friendship spawned some of Britten’s most notable contributions to the harp repertoire. Britten had Ellis in mind when he wrote the harp parts for several major works, including A Midsummer Night’s Dream, the War Requiem, and the Church Parables. Britten wrote his famous Suite for Harp for Ellis in 1969. Ellis and Britten collaborated with famed tenor Peter Pears during the 1970s. Britten wrote several iconic works for the duo, including Canticle V, The Death of St. Narcissus, The Birthday Hansel, and Eight Folk Songs.

After taking a 15-year break from the harp to care for his ailing wife, Ellis is back at his beloved instrument. Now in his tenth decade, Ellis generously shared with us some nuggets of his musical wisdom and stories from his colorful career.

Harp Column: Let’s start with our lightening round of questions to warm up: What’s the coldest church you’ve ever played in?

Osian Ellis: Coldest church? Canterbury Cathedral for a performance of one of the church operas. I spent the next two or three days in bed with a bad cold.

HC: What is your favorite movement in A Ceremony of Carols?

OE: My favorite part in A Ceremony of Carols has to be the “Interlude,” where I can create my own atmosphere and react to Britten’s music.

HC: In Britten’s Young Person’s Guide to the Orchestra cadenza, do you alternate right and left hand chords or split between the hands?