Mary developed a love for the harp at an early age. She came from a strong legacy of great harpists such as Grace Follet, Susann McDonald, and Dorothy Remsen. She received her Bachelor of Music degree in harp performance from the University of Southern California (USC), where she also did graduate work. Mary served as principal harpist of the Desert Symphony, the Redlands Symphony, the Riverside County Philharmonic, the San Bernadino Symphony, and many other orchestras in the Inland Empire area. She regularly subbed for the Pacific Symphony and was an active chamber musician throughout the Inland Empire and Los Angeles areas. In addition to maintaining a large teaching studio at her home in Claremont, Calif., Mary also served as harp instructor at Pomona College, California State University-San Bernadino, and the University of Redlands, where she directed the University of Redlands Summer Harp Camp. She was the founder of our beloved harp quartet, the LA Harptette. She served as the chair of the American Harp Society National Conference at the University of Redlands in 2018, where her exemplary leadership did not go unnoticed.

Mary’s love for music and art were inspirational. She truly enjoyed the process of rehearsing as much as the performances. She had a subtle way of leading others to constantly pursue knowledge and live life to the fullest. Her signature statement, “I’m working on it,” acknowledged and accepted that we are never perfect but always a “work in progress.” She had vast knowledge of orchestral repertoire and brought an intelligent and artistic sense to her performances. She was not intimidated by big, seemingly difficult projects, and worked on new repertoire with determination and precision. She was always looking ahead to new challenges and was always very prepared and eager to work out any details and nuances of the music through deep and meaningful discussions. In performances, she was very responsive to the conductor and reliable in her ensemble work. Music education was one of Mary’s priorities and passions. Her love of cultivating a community of harpists through educational opportunities was an inspiration to many. Mary was a very special light and spirit in this world. She was a rare and beautiful gem of the earth and a musician who played with passion, grace, class, and virtuosity. 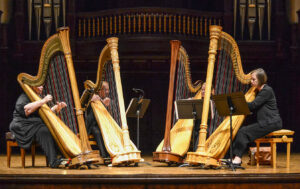 The LA Harptette performing at the Little Bridges Music Hall located at Pomona College on Feb. 20, 2016.

We mourn the loss of Mary, the founder and heart of our LA Harptette. She was a very talented musician who played with passion for her instrument, but more than that, she was a wonderful, kind, and sweet person who will be sorely missed.