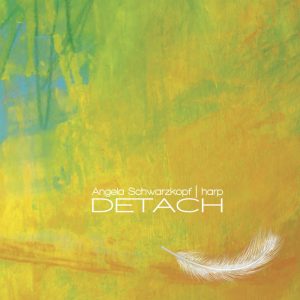 The 2020 JUNO Award Classical Album of the Year, detach

Angela Schwarzkopf won the 2020 JUNO Award for Classical Album of the Year: Solo or Chamber for her album detach. The first harpist to win in 25 years, she shares, “I am beyond thrilled to win a JUNO Award. It is such an honor to join the previous harp winners Judy Loman and Erica Goodman.” Loman and Goodman, who won their awards in 1980 and 1995 respectively, also won in the same category. Schwarzkopf adds, “This award is not just for me but for all the amazing composers who wrote for me, the performers who played with me, and my wonderful and patient recording engineer. This is such a big win for all of us.”

Released Nov. 9, 2019, the album features works by Canadian composers Monica Pearce, Elisha Denburg, Mark Nerenberg, Cecilia Livingston, Patrick Arteaga, and Kevin Lau, and includes performances by Toronto–based percussionists Étienne Levesque and Michelle Colton. Peter Gemmell was the album’s recording engineer. The recording was made in part due to a grant from the Ontario Arts Council, and the title track, written by Pearce, was commissioned with funding from the American Harp Society.

Due to the pandemic, the ceremony, originally scheduled for March 15 in Saskatoon, was postponed to a show held virtually on June 29.