A sensational journey of rhythm and sound... 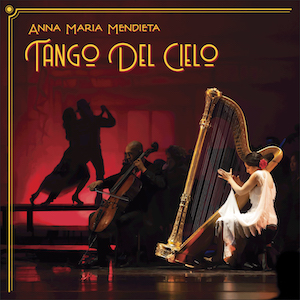 California native Anna Maria Mendieta was raised on music and dance, playing for years as a featured soloist with Theatre Flamenco of San Francisco. It wasn’t until 2004, that she discovered the thrilling world of tango, her gateway drug to the complex and feverish music of Astor Piazzolla. But to make this music her own would require not just arranging music for the harp, but acquiring some new techniques like chicchara to mimic the sizzling and aggressive technique of authentic tango orchestras.

In her latest release Tango del Cielo, Mendieta, along with a superb lineup of musicians, serves up all the fiery passion of this exceptional culture in superb form. Designed as a multi-media stage show with live dancers, the music arranged by multi-Grammy-award-winning composers Jorge Calandrelli, Pablo Ziegler, and Daniel Binelli transports the listener to the dimly-lit, smoke-filled chambers of mid-century Buenos Aires and the Old World, where the roots of this music can be found.

So it makes sense to include Asturias by Isaac Albéniz, where Mendieta displays her natural ensemble gifts, as if dancing with the orchestra. She leads as soloist, always coaxing a close, cheek-to-cheek partnership. Particularly stunning is the addition of castanets and Flamenco stamps and taps to the mix. You’ll be afforded a special opportunity to hear Mendieta shine in Ziegler’s mesmerizing Milonga en el Viento, a work he initially explained would be practically impossible on the harp because of its never-ending chromaticism. It would seem Mendieta never met a challenge she couldn’t conquer; she manages 200 pedal changes in order to share this richly elegiac work with us, a centerpiece of the album.

The album opens with Libertango, one of Piazzolla’s most famous tangos, and one that signaled his break from “music for the feet” and ushered in an era of Argentine concert music. That being said, it will be hard to sit still while listening to this arrangement by the exceptionally talented violinist and leader of Quartet San Francisco, Jeremy Cohen. Cohen’s violin styling also shines with raw flamboyance in Bordel 1900 as well as the dramatic Jalousie by Jacob Gade, a work from the silent film era in which Cohen plays a violin owned by the concertmaster of the MGM Orchestra and played in dozens of films during the Golden Age of cinema.

A work almost out of character, as though a palette cleanser, is the stunningly simple yet heartbreaking Ave Maria by Piazzolla. Arranged as a harp solo, Mendieta’s tender interpretation is dedicated to her deceased father. She’s joined midway through by cellist Joseph Hébert, improvising as if answering her prayers for peace. It is one of the most stunning moments of the recording.

Rounding out the album is sheer genius, beginning with a short work Tientos, a short work by Raoul Laparra originally written for chromatic harp, an instrument invented in Spain in the late 16th century. The solo arrangement for pedal harp affords Mendieta the chance to contrast the simplicity of the chords with the raucous, needing-to-bust-out quality of Latin music. She uses this short work to lead directly into the finale, an original Malagueña-Milonga that brilliantly fuses flamenco and tango for an explosive finish.

A sensational journey of rhythm and sound, Anna Maria Mendieta’s Tango del Cielo will continue to intrigue over many listenings.