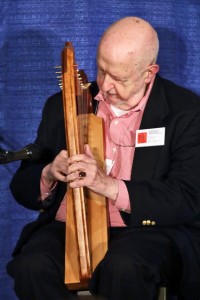 The Somerset Folk Harp Festival awarded Sam Milligan their third Lifetime Achievement Award on July 31. The honor was bestowed in recognition of “his efforts to expand the harp world with his pioneering harp books, his role as the first editor of the American Harp Journal and his substantial contributions to the Historical Harp Society,” according to the festival. “There are exceptional persons in the harp world who make extraordinary contributions, gifts that just keep on giving. That’s the case with Sam Milligan,” says Nancy Hurrell, who wrote a tribute to Sam that appears on the festival website.

Milligan is well know as the author of the Fun from the First and Medieval to Modern instructional books first published in the ’60s. Medieval to Modern Vol. 3 was published in 2013 and reviewed in the November-December 2013 issue of Harp Column. (Read the review.) He was also featured in an interview that appeared in the September-October 2008 issue of Harp Column. (Download the issue.)