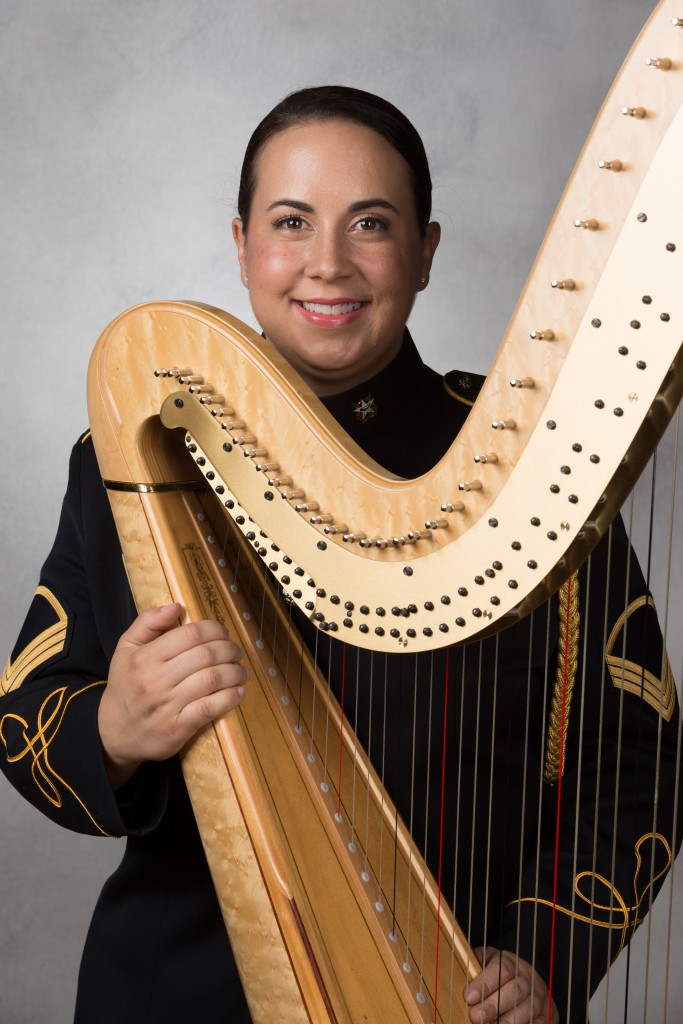 As harpist with the The United States Army Band “Pershing’s Own,” Staff Sergeant Nadia Pessoa’s harp life surely qualifies as one of the most interesting and diverse you will encounter. At first glance her job may seem like that of any other freelancer playing for dinner parties and private events, except that the guest list is likely to include the Vice President or First Lady. And yes, in case you’re wondering, she had to go through basic training. This Sunday Pessoa will be featured with the ensemble’s Concert Band performing the third movement of Ginastera’s Harp Concerto. (Tune in to youtube to watch live at 3:00 p.m. ET). I caught up with Nadia to find out more about her fascinating life as a military harpist…

Q: So, you are playing the Ginastera concerto on six weeks notice! That’s quite a challenge. Tell us how this came up.

“Our conductor, Colonel Timothy Holtan, approached me about programming a harp solo, and we discussed a few options in terms of repertoire. He thought the third movement of the Ginastera would showcase the variety of colors and techniques possible on the instrument, since it begins with a cadenza. I was thrilled that he selected it, because it is one of my absolute favorite pieces to play.

Q: How have you prepared?

“I started by immediately zeroing in on what I consider to be the trickiest parts, and the pedals. I’ve played the entire Concerto before (as a concerto competition winner in grad school, and with the Fort Collins Symphony), but it had been several years, so I needed to get comfortable with it again.

Q: Tell us a bit about your background. Where did you study?

“I studied with Susann McDonald at Indiana University and with Lynne Aspnes at the University of Michigan, and spent half a year studying in Vienna, Austria. My father was my first harp teacher — he plays the Paraguayan harp, and I started playing by ear when I was two and a half. I transitioned to pedal harp in high school with Valerie Von Pechy Whitcup.

Q: Because you’re the harpist with The U.S. Army Band, does that mean you’ll be playing a band version of the piece? Is there even a band version?

“We also have a full orchestra, but for this concert, I am performing with the Concert Band. The version we are playing was arranged by Lawrence Odom from the United States Air Force Band, in the 1970s. I am playing an abridged version of the cadenza because of time constraints.

Q: You’ve mentioned having a Skype coaching with Heidi Lehwalder. What was that like?

“I reached out to Heidi because she is one of the foremost experts on the piece, having performed it for Mr. Ginastera at Avery Fisher Hall. I wanted to play it for another harpist, and as a professional musician, it’s difficult to ask your colleagues to listen because everyone has busy performing schedules and families. Heidi was incredibly kind and had a lot of great insights about the piece. I told her she needs to write a book — the anecdotes she has from decades as a touring harpist could fill several chapters!

Q: So I have to ask…. what’s it like being a member of the armed forces?

“It’s great. It is an honor to serve the country and to be able to connect with diverse audiences through music. I always knew I wanted a performing career, so I feel tremendously fortunate to be able to combine that with military service.

Q: Is it true that you have to meet the same fitness requirements as other Soldiers? How do you cope with that???

“Yes, the physical fitness requirements are the same for Soldiers across the Army. We have to take a fitness test twice a year with pushups, sit-ups, and a timed 2-mile run. We actually just had a fitness test last week, so I was going to the gym in addition to practicing! It’s always a relief when it’s over. On-the-job challenge for a military harpist— practicing in combat boots.

Q: Do you have to rehearse in combat boots?

“Yes, most of the time! I wear boots with our default uniform, which is what I usually rehearse in. For this week’s rehearsals, I’ve been wearing the Army Service Uniform (ASU) instead, so I can play in patent leather oxfords.

“We rehearse in the morning, then we have organization-wide training meetings, and time to work on administrative duties, chamber ensembles, or individual practicing. Orchestra rehearsals are typically in the afternoon, and depending on the concerts we have coming up, that will either be symphonic repertoire, Rock Orchestra (for summer concerts), or Jazz Orchestra (for our annual holiday show). I also perform as a soloist or in a duo with a violinist for evening events for military leaders and visiting heads of state at the State Department, the Library of Congress, and the Vice President’s residence.

Q: What types of things do you play with the group and who is your typical audience?

“We play a wide variety of repertoire, which is one of the best things about the job. It ranges from orchestral transcriptions (we recorded The Firebird, and I’ve had to play La Forza del Destino in E-major, E-flat, AND in F!) to opera arias, Broadway and pop arrangements, marches, and newly commissioned works. The audiences vary — I’ve played for dinners where I have been seated less than three feet away from the Vice President or First Lady Michelle Obama. Audiences for our band concerts range from tourists of all ages for summer concerts at the U.S. Capitol, to crowds of over 5,000 for our annual 1812 Overture Concert on the National Mall.

“There are a lot of moments that seem surreal, like playing my first concert five days after finishing Basic Training, or playing for the White House Christmas party a few months after moving to D.C. One of the highlights was our trip to China in 2012, where we performed in Beijing, Nanjing, and Shanghai, alongside the Military Band of the People’s Liberation Army. It was the first time in history that military ensembles of the two nations had performed together, and it really showcased the power of music as a force for cultural and political diplomacy.

Q: You auditioned and joined the band in 2006—congrats on your ten year anniversary! Have you ever been featured this prominently before?

“Thank you! It’s amazing how time flies. Yes, I performed the Saint-Saëns Morceau de Concert in 2007, and played a piece that was specially written for me (three popular Brazilian songs, arranged by Paul Murtha for harp and band) at several concerts in 2010, including at Avery Fisher Hall at Lincoln Center. We’ve also played several pieces in the last year like Prelude to the Afternoon of a Faun and Bruch’s Scottish Fantasy, that have had prominent harp parts.

The concert takes place Sunday, September 25 at 3:00 pm ET in Brucker Hall on Fort Myer in Arlington, Virginia. Watch Nadia’s performance on YouTube. Find out more about the United States Army Band at www.usarmyband.com or on their Facebook page.