Harpist Hannah Lash has also been composing music since she “was really tiny,” says the Cleveland Institute of Music/Harvard trained/now professor of composition at Yale University School of Music. If that sounds like a run-on sentence, it’s only because it’s pretty hard to sum up Lash’s many musical achievements in one tidy introduction. While Lash has been composing for as long as she can remember and racking up awards including the ASCAP Morton Gould Young Composer Award and a Charles Ives Scholarship from the American Academy of Arts and Letters, to name just a few, this season has been especially rewarding for her. First was the premiere of her harp concerto, commissioned by Carnegie Hall and the American Composers Orchestra with whom she played the piece at Carnegie’s Zankel Hall on October 23 (scroll to end to listen). Then came her April 7 concert at New York’s Miller Theater, which got a shout out by The New Yorker as well as The New York Times. We caught up with Hannah to find out more about how being a harpist influences her composition style.

Q: Your name is popping up everywhere these days from The New Yorker to The New York Times. Why do you think people are suddenly taking such an interest in what you’re doing? 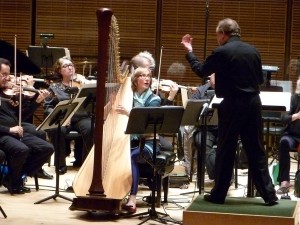 Hannah Lash rehearses her Concerto for Harp and Chamber Orchestra with the American Composers Orchestra.

“Building a career is such a slow process. I’ve been working my whole life at what I do, and honestly I think the recognition has been sort of a gradual thing, though there does seem to be a tipping point at which the accumulation of things makes an impact. I think I could point to a few recent concerts, premieres, performances that have made a real difference for me both as a composer and a harpist. A big one is the premiere of my first harp concerto at Carnegie Hall. It was commissioned by Carnegie Hall and the American Composers Orchestra, and I premiered it at Zankel last October. It got a lot of attention and I think people began to understand that my career as a composer and my career as a harpist could intersect and benefit one another.

Another recent concert that had a lot of impact on my career was my Composer Portrait at Miller Theatre in NYC. I performed a piece I had written for harp and string quartet with the JACK Quartet, which was a lot of fun and got a good bit of publicity. It’s unusual to be a composer whose instrument is harp, and I’ve found recently that people find this interesting. And for myself, I find the project of writing for harp unbelievably compelling. So I’m sure that passion comes across to my audience.

Q: Which came first for you, the harp or composing?

“Composing—when I was really tiny. But the harp was not far behind; I had had my eye on it from the time I was too young to talk! My aunt, Patrice Lockhart, would come through my hometown with her harp after an audition; she would stop overnight at my parents’ house, and bring her harp in and play for us. One of my very earliest memories is of watching her play, and being allowed to pluck a string.

Q: A lot of your works feature or include harp, which we’re happy to see! Do you feel that as a harpist yourself you have an obligation to write for the harp?

“I don’t feel it as an obligation; it is more like a compulsion—a passion. I love the harp both as a composer and as a harpist, so it is endlessly fascinating to me to think about ways to write for it and expand its voice in ways I feel are new and engaging. I want to illuminate its character as being the versatile and compelling instrument I know it to be. As a composer, I am attracted to the harp’s sound within a lot of different ensemble textures as well. I think in many ways it is the harp that is the kingpin of my orchestrational palette, even though I don’t always treat it as a main character within an orchestral texture. It blends so beautifully with other colors, and also allows otherwise disparate colors to blend with one another.

As a solo instrument, I find it unbelievably expressive and sensitive. I love the challenge of keeping compositional material in motion harmonically while making all the chromatic shifts practical physically. There is a choreographic element to conceiving of material that moves quickly for the harp which I find really fun to think about.

Q: Do you consider yourself a “harpist-composer” in the same tradition as people like Salzedo, Grandjany, Renie, and Tournier?

“Yes and no… unlike the harpist-composers you mentioned, the majority of my compositional output is not centered around the harp even though I absolutely write for it a significant amount, and practice for a few hours each day, maintaining an active performance schedule. I love writing orchestral music, and have been fortunate to have a lot of commissions from orchestras. I also write a good deal of chamber music which often doesn’t involve harp, and I’m about to have my first full-length chamber opera premiere. So my compositional career is fairly diverse, and I don’t ever want to be thought of as a composer of primarily harp music. But it is a very important project to me to write for my instrument, and to perform my music and also harp music by other composers, past and current.

Q: Harpists love to hate on composers who write unrealistic parts for us. As a composer yourself, what’s your perspective when you encounter a challenging part?

“I feel that there are two main categories challenging parts: one is a challenge for which there is maybe not a great payback once you meet it, and the other is equally challenging but ultimately incredibly rewarding. Sometimes you can’t tell whether it’s going to be worth all the pain of learning an impractical part until you’ve mastered it totally and allowed it the time it needs to sink into your muscles. As I’m sure is the case with other harpists too, I will usually get a pretty good idea about whether something is worth all the work of learning it, but I’ve been surprised on a few occasions too. I try to be as optimistic as possible when encountering something that seems near impossible to me. I’ll sit with it for a pretty long time and don’t give up until I’m sure beyond a doubt that it isn’t going to work, or that what the composer is after can be achieve more practically.

Q: I hope this question doesn’t sound off-putting, but I’m really curious about your perspective as a composer: what can be done with the harp that hasn’t already been done?

“You could ask that question even more broadly: what can be done with any instrument that hasn’t already been done– or with the orchestra, or a string quartet, or piano trio? And the question will always be impossible to answer outside of the specific context. Each piece is an answer to that question. But maybe to try to answer your question in a more direct manner, I would say that I want to do everything that I can (as many others are as well in other ways) to continue to emancipate the harp and bring audience’s awareness to it as an instrument that need not be considered “unusual” or “special.” It is a beautiful polyphonic instrument capable of expressive and meaningful music making. It shouldn’t be ghettoized as a specialty instrument. I know a lot of harpists feel the same way, and I know of so many who are working to bring the harp into a more mainstream status in concert-goers’ and presenters’ minds. As a composer, I hope I can do my part to champion the harp as being a compelling and flexible instrument, multi-demensional in its capabilities ready to act as subject rather than object within a musical framework.

Q: Which harpists do you most admire and why?

“I love Willy Postma’s playing; it is so delicate and yet powerful, and such great colors! I also admire her championing of newer music. Her recording of the Rautavaara Ballad for harp and strings is fantastic, as well as the Rautavaara harp concerto, Rota’s Sarabande e Toccota, and so much more. I’m also a huge fan of my teacher, Yolanda Kondonassis. Her virtuosity, unerring taste in her playing, and crystal-clear sound are extraordinary! Love Alice Giles’s playing as well, and her interpretations of more recent music. There are so many fantastic harpists it is actually hard to narrow my list down, but those three I’ve just mentioned leap to mind as ones I particularly hold as role models for my own playing.

Q: Which composers do you most admire and why?

“This list is also way too long to include in full, but here are just a few favorites: Henri Dutilleux for his gorgeous sense of color and elegant forms; Einojuhani Rautavaara for the expansive and mysterious material, and sheer gorgeousness of harmonic palette; Gyory Ligeti for the counterpoint, the rhythmic and harmonic liveliness, and the virtuosity and experimental yet very physical attitude toward sound; Sofia Gubaidulina for her formal way of working out materials which, despite the rigor of her thinking end up sounding mysterious and mutable. Then looking back in time further, Ravel, Debussy, and Faure; Schubert, Schumann Beethoven, Bach, Froberger, Schutz, Monteverdi, Josquin… my list goes on and on!!

Listen to Hannah’s Oct. 23 performance of her Concerto for Harp and Chamber Orchestra performed with the American Composer’s Orchestra at Zankel Hall: