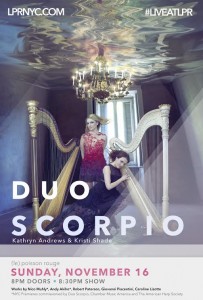 It’s been a little over two years since we featured Duo Scorpio in our September-October 2012 issue. Since then the Scorpions Kristi Shade and Katie Andrews have been very busy touring the globe and working on new commissions for harp duo. This Sunday the pair performs at Le Poisson Rouge—the trendy NYC music venue that caters to all genres. So just how did a classical harp duo land at Le Poison Rouge? Read on…

Q: Congrats on getting onto the Le Poison Rouge series! For people outside NYC, can you describe this venue and why playing there is a big deal?

We are very excited and looking forward to our upcoming concert. Le Poisson Rouge (LPR) is a great venue in New York City. They present all sorts of shows and concerts but have become a big place in the classical world, especially in the contemporary classical scene. It is a bit different than a traditional concert hall with a more laid back, downtown vibe, located in The Village. We thought this would be the perfect spot to do the New York premieres of our commissions by Nico Muhly, Andy Ahiko and Giovanni Piacentini. We will also be performing our very first commission by Robert Paterson, as well as Caroline Lizotte’s Raga, a standard in the harp duo repertoire. Since most of these composers live in NYC, we are ecstatic that they will be able to come to the concert to introduce their pieces.

Q: NJ.com picked your concert as one of the “top 5 NY shows this week” along with Joshua Bell and the Metropolitan Opera. How does that make you feel?

We were really honored to be picked as a featured show in New York along with Joshua Bell, The White Light Music Festival and the Met! We were thrilled to be recognized and hope this will help spread the word to an audience who may not have otherwise thought to attend a harp concert.

Q: Are you surprised at the reaction a harp duo is getting from mainstream media?

Not so much surprised as excited! One of our goals with this ensemble is to break boundaries and open the harp (and harp duo) to a mainstream audience. We think people will be surprised at how accessible our music is and we hope they enjoy it. Mainstream media may have only one idea about what a harp can do and we hope to change that stereotype.

Q: How have you managed to get their attention?

We have done some of our own publicity, reaching out to different newspapers and magazines. We have also been promoted through LPR as well as through the composers on the program.

Q: Any advice for others on how to get noticed?

As musicians these days, we end up doing most of our own PR and marketing. It’s great to share concerts through social media like Twitter and Facebook but to also reach out to local publications so they are aware of your ensemble and concert. Sometimes this leads to a feature article about your group and concert, which helps spread the word to a wider audience.

Q: The last time we talked with you (September 2012), you had just begun to embark on several commissioning projects. Can you tell us how some of those turned out and what new commissions you’ve worked on since then?

Yes, we have been very busy since September 2012! Since the release of our album in 2012, we have commissioned several new composers such as Nico Muhly, Andy Akiho, Giovanni Piacentini among others. We were recipients of American Harp Society Grants and a Chamber Music America Grant, which helped these commissions come to life. We have been lucky enough to travel all over the U.S. performing in places such as Miami, San Diego, Denver, New Jersey, Delaware and Georgia. Most recently, we premiered our commissions from Muhly and Akiho at the World Harp Congress in Sydney, Australia. It has been quite a journey! We have several other pieces in the works and continue to be inspired and motivated to expand the repertoire for two harps.

Q: Anything else you want to let Harp Column readers know about?

We hope harpists out there will enjoy performing the music we have commissioned as much as we do!

Duo Scorpio performs on Sunday, Nov. 16, at 8:30 p.m. (Purchase tickets.) Read more about the duo on their website.