This week Ann Hobson Pilot releases Astor Piazzolla: Escualo, her new recording with Lucia Lin and JP Jofre on the Harmonia Mundi label featuring the works of Astor Piazzolla. I asked the former Boston Symphony Orchestra principal harpist to tell us about the recording along with what else she’s been up to lately.

Q: Sounds like you’ve been a little busy since your retirement from the Boston Symphony Orchestra! Tell us about your new album release. How did this project come about?

I retired from the Boston Symphony —not because I did not love it and thought it was the best harp job in the world—but because I thought that 40 years was enough in one place and I wanted to do more things outside of orchestral playing—such as this project.

Q: What drew you to Piazzolla’s music?

I first became acquainted with Piazzolla’s music with the wonderful arrangement of the History of the Tango for flute and harp by Kari Vehmanen that so many harpists were playing back around 2010 or shortly after I retired from the BSO. I became intrigued with his music. I loved the obvious influence of jazz rhythms and harmonies and the dance-like feel of some of his music. 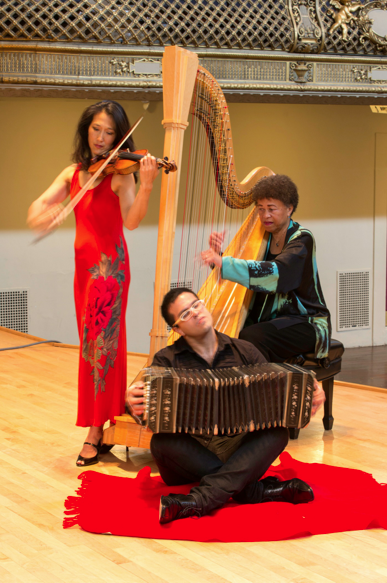 Q: Do you feel that harp is an effective substitute for guitar, which is more commonly associated with this style?

Of course the guitar is wonderful in Piazzolla’s music and is his original choice of instrument, but substituting the harp adds a different dimension to his music. We just recently got our first review by Jon Sobel of the Seattle Post and his comments were to the point of this question. “I might have imagined a whole album of Piazzolla featuring the harp would be a little too dolce, but while it’s certainly filled with gentle landscapes it’s not at all weak, but solid and firmly stated, a testament to the endless potential of Piazzolla’s music and the sensitivity of these fine musicians.”

Q: Where did you meet the other players on this recording?

I knew Lucia Lin because we had worked together for many years in the BSO and I had long admired her playing. After I became committed to the idea of doing this recording and mentioned it to a friend in NYC, he suggested JP Jofre, the wonderful bandoneon player originally from Argentina. The bandoneon was Piazzolla’s instrument and I thought it would add a true Argentinian flavor to the arrangements and I believe it does.

Q: How did you choose which Piazzolla compositions to record? The first challenge was to find an arranger for the works I wanted to transcribe, but that ended up being the easy part. At the time I was still teaching Michael Maganuco, who was my harp student at BU but who was also studying composition and who had recently won the prize for his composition “Awakening Stillnesses” at the USA competition. I discussed  my idea of a CD of Piazzolla’s music with him and together we worked out which of Piazzolla’s music would lend itself to this combination of instruments. As Michael has stated, “Most of Piazzolla’s music was originally composed for tango quintet, which consists of violin, bandoneon, piano, guitar, and bass. So the challenge was reducing an entire rhythm section.” What was difficult for the harp arrangements was that Piazzolla’s music is so chromatic, but Michael wrote some amazing arrangements and the ones with bandoneon were added to by our bandoneon player, JP Jofre.

Q: Do you think this recording will be perceived differently than other similar albums? How?

I don’t know of any other recording that has this combination of instruments—harp, violin and bandoneon—so I hope this recording will be viewed in a category of it’s own.  Basically I hope people —especially harpists—will buy it and listen and judge for themselves.

Q: Now that you’ve finished this, what’s the next project you have up your sleeve?

Nothing up my sleeve. I’m still playing concertos and chamber music and teaching, but I’m also enjoying the freedom that comes with semi-retirement. Swimming, tennis, reading, etc.