Second place in Israel is just the start for this rising French phenom.

The distance between first and second in an international-level competition is never much, sometimes not even enough to be objectively measured. But as any runner-up will tell you, second isn’t first, and it can be a difficult pill to swallow. Anaëlle Tourret took her second-place Israel harp contest finish in graceful stride, with perspective far beyond her 23 years. We wanted to know more about this compelling performer, so after talking to Tourret at the contest we caught up with her a few weeks later in Paris via Skype.

(This article is a companion to our feature interview, Crowning Achievement.) 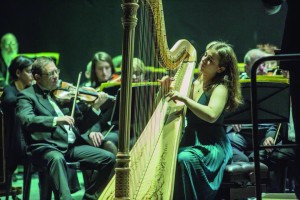 Anaëlle Tourret performs the Ma’ayani Concerto in the finals of the Israel competition, an experience she called “a dream come true.”

Harp Column: Anaëlle, you are a beautiful player and one of the most musical harpists I have ever heard. I am sure you have a successful career ahead of you and we will be seeing much more of you in the future. We spoke on the stage just minutes after the awards ceremony. I think that it must be difficult to win second place yet you were so gracious and poised. I was impressed by the way you and YuYing laughed together on stage and treated each other as friends.

Anaëlle Tourret: I think that everything happens for a reason. Since I was a child, I heard about the International Harp Contest in Israel. Just reaching the final stage and performing the Ma’ayani concerto with the orchestra was a dream come true for me.

HC: What does it really take—besides talent, good teachers, and lots of practicing—to compete at an international level? What advice can you offer other harpists?