It should come as no surprise to anyone when I point out that harpists comprise a rather—shall we say—un-diverse segment of the population. Let’s call it like it is: at least in the U.S. and Europe, harpists tend to be white, and more often than not, women. Of course the problem of racial diversity is not limited to the harp: only 4.2 percent of orchestral musicians in general are black or hispanic, says Angelica Hairston, who plans to showcase talented African American artists at her April 17 Challenge the Stats concert event. Hairston has rounded up some of the best artists in Boston including harpists Charles Overton and Mason Morton, along with Hairston herself, to perform a concert that will “shine a spotlight on young professional artists who can be role models for the next generation,” she says. We caught up with Angelica to find out more about Challenge the Stats and why the project is so important to her.

What is Challenge the Stats? 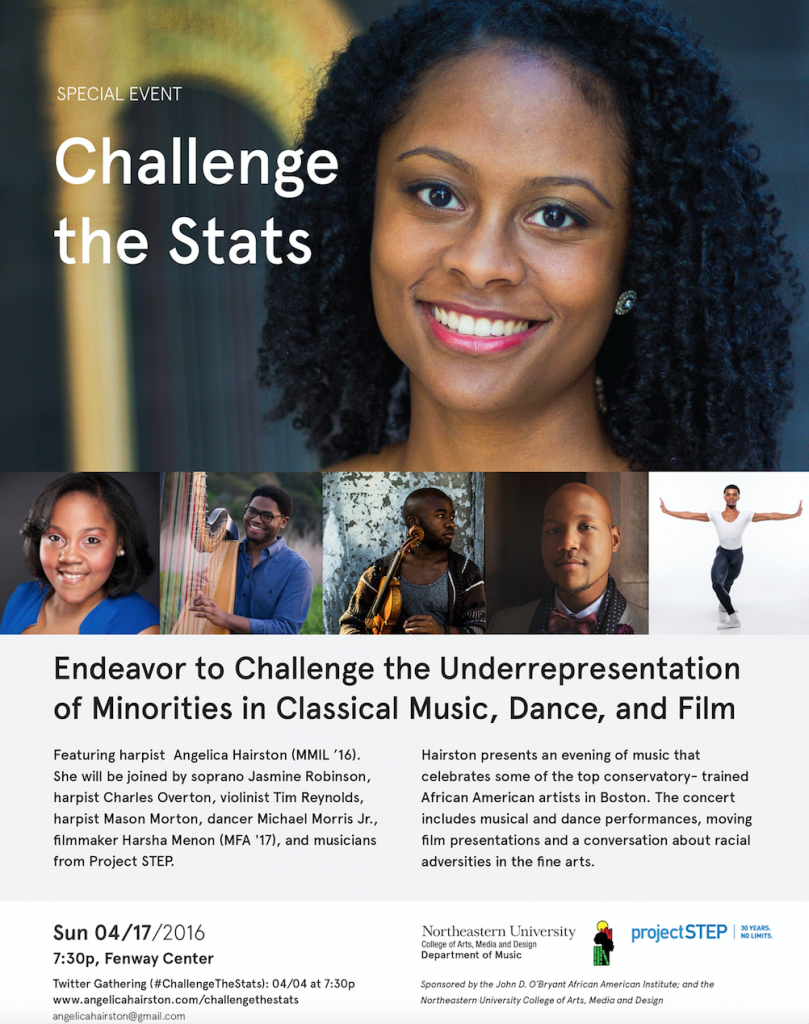 Challenge the Stats is a concert that celebrates some incredibly talented African American classical musicians, dancers, and filmmakers who are based in Boston. The concert shines a spotlight on young professional artists who can be role models for the next generation. Challenge the Stats also provides accessibility to the fine arts for new audiences. I am so excited to present this event that highlights some brilliant artists and also includes harp in every piece!

I’ll be performing alongside soprano Jasmine Robinson, violinist Tim Reynolds, and dancer Michael Morris, Jr. There will also be a film presented by Harsha Menon and the night will end with a harp trio made up of myself, Charles Overton and Mason Morton. The concert is free and takes place on April 17th at 7:30 pm at the Fenway Center in Boston.

In addition to the concert, we are hosting a Twitter chat that takes place on Monday, April 4th at 7:30 pm EDT. Using the hashtag, #ChallengeTheStats, we hope to bring forth tangible ideas and solutions that work toward increasing diversity in classical music, dance, and film. As a millennial, I love the way social media can connect people from around the globe and I’m excited to see what we can discover in the online conversation.

What are you doing now and how does Challenge the Stats relate to your current studies?

I am currently a Dr. Martin Luther King, Jr., Graduate Fellow at Northeastern University studying Music Industry Leadership. The graduate degree program is a one-year intensive that focuses on the ins and outs of the music business. After doing my undergrad studies with Judy Loman, I’m thankful to be in a graduate program that helps me sharpen the business skills that are becoming more and more essential for harpists in the 21st century.

I’ve always been passionate about creating platforms for minority musicians in the arts. I have worked closely with my Performing Arts Administration professor, Margo Saulnier, to turn that dream into a reality through the Challenge the Stats. I’m also a huge lover of chamber music, and find myself constantly inspired musically and personally through collaborations. For me, chamber music is a beautiful model of society where members work together toward a common goal, problem solve as a team, and ultimately strive for excellence in unity. That idea of unity and excellence is something that I hope will be a common thread through Challenge the Stats.

I guess it’s pretty obvious when you look at your average symphony orchestra that minorities are under-represented. What do you think is the biggest reason for that?

Only 4.2% of U S orchestral musicians are black or Hispanic, less than 4% of opera audiences are African American, and less than 1% of compositions performed by American orchestras are by composers of color. I think that these statistics really boil down to exposure and opportunity. Often, in our society, children of color are disadvantaged at a disproportionate rate. If young children are not exposed to classical music and have no access to instruments or instruction, the path to a professional orchestral career is extremely difficult to obtain. There are some incredible programs that are working to change those numbers, such as Project STEP here in Boston. I’m thrilled that a group of students from Project STEP will be featured in Challenge the Stats! I’m also incredibly thankful for the support that I received during my time in the Atlanta Symphony Orchestra’s Talent Development Program (TDP), which allowed me to study with Elisabeth Remy Johnson (ASO principal harpist), attend prestigious summer music programs, and assisted me in purchasing my harp.

Do you have any personal insight to share on what it’s like being a minority in the classical music field?

I am fortunate to have started my harp studies with an African American harpist, Ms. Monica Hargrave, who introduced me to the instrument and helped me transition from lever harp to pedal harp. During my time in the TDP, I was able to have a community of other minority musicians who were also passionate about classical music. In most classical music settings outside of TDP, I was (and continue to be) one of the only people of color, which can be an isolating experience.

One of the life-changing summer programs I was able to attend was the Boston University Tanglewood Institute. It was there that I worked with Ann Hobson Pilot, the first African American female to hold a principal position in a major symphony orchestra. Working with Ms. Pilot really opened my eyes to the possibility of a significant harp career. Because of my experience working with a harpist who looked like me, I grew to realize that seeing diverse musicians on a major concert stage was attainable. I was thankful to have harp teachers and mentors who could connect with me on a cultural level and gave me a safe space to ask tough questions and visualize my future career in classical music.

Harpists have had more diversity in recent years thanks to some amazing school programs in urban areas. Do you think we are moving in the right direction?

Absolutely! I’ve been truly inspired by all of the music programs that are providing instruction to harpists from diverse backgrounds. I have spent time with the Urban Youth Harp Ensemble in my hometown of Atlanta and with the Cicely L Tyson Harp Ensemble in New Jersey. Both Carolyn Lund (UYHE) and Robbin Gordon-Cartier (CT Harp Ensemble) are dynamic leaders who are truly committed to providing opportunities to harpists from all backgrounds. I hope my career allows me to make an impact in the same way these brilliant teachers are influencing the lives of their students.

You have an awesome lineup of artists including two other amazing harpists on your concert roster. Can you tell us about the programming?

I’m so excited about the program and the artists that will be featured in the concert! There is a huge range of repertoire from traditional spirituals to an art piece based on the lyrics of Kendrick Lamar for harp, spoken word artist and dancer. We are also working on a film that tells our stories as minorities in the fine arts and explores the artist’s role in advocating for social change. A composition by African American harpist Maurice Draughn will also be performed. He was kind enough to rearrange one of his works specifically for the occasion!

Rehearsing with two of my best harp friends, Charles Overton & Mason Morton, has been a blast! Both Charles and Mason are models of kindness and character. It’s amazing how much we can get done in rehearsals amid all of the laughter and jokes! Charles is a brilliant classical and jazz harpist studying at Berklee. You can hear him play both genres at the concert. Mason Morton is the harpist with the Sons of Serendip; the Boston-based music group that reached the finals on Season 9 of “America’s Got Talent”. Mason and I will also be performing a harp duet in the concert, complete with ankle bells and cymbals!

What do you do when you’re not planning concerts and tackling the world’s biggest issues?

Ha ha! Planning concerts and making an impact really drives me, but during the off times; I love to spend time in the kitchen. Cooking southern comfort food during the Boston blizzards definitely helped me imagine I was still in the Georgia sunshine!

The concert is Sunday, April 17, at 7:30 p.m., at Northeastern’s Fenway Center, 77 St. Stephen St., Boston. Tickets are free with a ticket RSVP at www.angelicahairston.com/challengethestats.

Join in the Twitter Gathering on Monday, April 4, from 7:30 p.m.-8:30 p.m. EDT. To get involved, type #ChallengeTheStats in the Twitter search bar on April 4th at 7:30pm EDT to tweet comments and follow the conversation.