I’m writing this as I speed through the French countryside, looking out of the train window, and watching the shore disappear, to be replaced by neat farmland, clay colored tile roofs, and herd of white cattle. I’m leaving Nice after completing my second week at the Academie Internationale d’Ete de Nice, this past week with the amazing Marie Pierre Langlamet. While the overall structure of the week remained the same as the last, with Emmanuel Ceysson, the lessons and experience were quite different. Here’s a link to my blog from week one!

Instead of half an hour each day, with Marie Pierre, we had a one-hour lesson every other day, and only one of these lessons was open to the rest of the studio. I stepped in as Langlamet’s unofficial assistant on the first day, helping to organize a lesson schedule for the week, and recruit people to play in the open class (which was designed to feature standards of the harp repertoire). With a little bit of switching, I got the week planned, with the open classes featuring Faure’s Un Châtelaine en Sa Tour, Hindemith’s Sonata, Ravel’s Introduction and Allegro, Debussy’s Danse Profane, and a Handel Toccata and Sarabande (to focus on muffling technique). Lessons and classes with Langlamet centered around finding vivid visual imagery to accompany each section of a piece. She also focused on paying attention to note values, bringing out contrapuntal voices, and decisive muffling techniques. At the end of the week, she encouraged us all to experiment with technique as a means to move towards the sound we envisioned for a piece, and to think outside of the typical assumptions and drawbacks of the harp. For instance, we shouldn’t assume that each note has to ring until the sound naturally dies down, we can be vigilant about note values and tones via our technique.

Something that really struck me about working with Langlamet was her humility and unassuming attitude. She is of course an extraordinarily accomplished harpist and an incredible musician, but she comes off as very down to earth, and always putting the music first in a very genuine way.

I am coming away from these two weeks having learned so much about the harp and about musicianship, as well as getting the opportunity to meet amazing colleagues and spend time in a beautiful place – I really feel lucky.

I am also leaving with a list of things to do differently next year (or tips for someone thinking of attending):

The festival is certainly a kind of “live and learn” experience as far as logistics go, but saying that I would do it differently next year, doesn’t mean that I didn’t thoroughly enjoy myself! I also had a wonderful time during my practice breaks this week:

I went to the beach and ate snails afterward: I walked to the Musee Matisse and spent an afternoon in the museum and at the adjoining park: 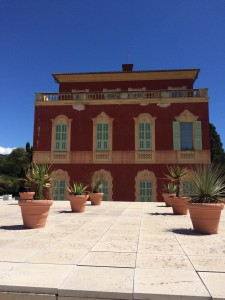 I heard an incredible concert featuring Marie Pierre Langlamet on the Debussy Danses and the Ravel Introduction and Allegro (yes, both!) at the beautiful cloisters: Now, I’ll spend the next 10 days away from the harp, after a long summer of festivals, to spend time with friends in Ghent, Belgium, Paris, France, and Villabandin, Spain. I’m looking forward to a break from playing, but also further forward to starting my masters in Orchestral Studies/Harp Performance at Chicago College of Performing Arts (Roosevelt) in the fall with Lynn Williams, and settling into a new (but familiar) city!