“A lovely debut you’ll listen to over and over. Go and get it!” 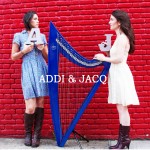 I recently read a fascinating article about listening to music. It claims if you want to be well-rounded and get at the intricacies of musical creation, you should listen to everything—music from all genres—even if those genres may not be to your taste. The payoff can be enormous and, in the case of the new album from Addi and Jacq, offer a chance to cross all sorts of boundaries and break down the idea of classifications.

And maybe we can add to that, “find inspiration in the grammatically quirky.” It was a Craigslist post from an Arizonian that read, “You can find something great in the less likely places” that is the inspiration for the album’s title track and frames the premise of this gauzily elegant debut album of the New York duo. Each song acts as a different mood, perhaps in the life of this woman finally fully realized in music, offering up the opportunity for Addi McDaniel’s richly prismatic voice, overdubbed into a splendid choral mix. Jacqueline Kerrod sparkles as “back-up band” in her own multi-tracked version of a harp chorus. The result absolutely mesmerizes.

Right at the outset with falling arpeggios and humming, I found myself warming up my own voice to join in the title track. The words that tumble out are perhaps too cloying, but then I found the rhythm—all spun sugar and prose—a personal essay of longing and processing. The bass line of the second track, “Home,” adds a percussive and propulsive quality to the lyrics, “something about the way your hand felt on the small of my back” and a little trill feels like that tingly feeling when that hand feels like home and you know it.

The recording is beautifully produced and carefully crafted, so much so that when you see a picture of two artists, it’s difficult to reconcile that these two make so much sound. The hip hop-esque “Stars Ever Since” is one such song that bristles with tough-girl energy inside a carefully balanced symphonic touch.

Kerrod brings out some lovely colors from the harp, emphasizing the lament of “Kinda Funny.” She has the ability to make us hear a harp, but also some other instruments altogether, ones that are archaic, jazzy, techno. It’s a jumble, and yet it works, the sound commenting on the words, punching out each feeling.

Those feelings, as I wrote earlier, seem over-indulgent, but the more closely I listened, the more I realized these words could be mine. Life is complicated; relationships can get messy; and yet why not sing about it as beautifully as possible?

And as if to emphasize the power of the human spirit, the bonus track asks why don’t we try again? Indeed!