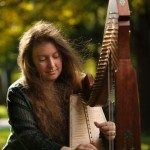 Sherri Matthew arranges and records New Age music for Irish wire strung harp and digitally sampled organ, accompanied by sounds from nature, using Gregorian chant melodies from the Catholic Liber Usualis. She recently released her first CD Vox Celeste, an album with eight New Age tracks evocative of Enya’s vocal layering and filled with a timeless quality derived from classical and medieval musical influences. The wire harp was traditionally (for 2,000 years) a secular instrument, so she is presently developing a modified playing technique to accommodate chant, based on the studies of current wire harp musicians and scholars, who are primarily working with Celtic folk music material. Her organ work is digital, layered many times in her recording studio to recreate a cathedral ambiance. She also maintains a blog at her website with wire harp tutorials and related topics. She studied music and business administration at SUNY Fredonia from 1987 to 1991 and completed her degree with honors (Summa Cum Laude) at Green Mountain College, Poultney, Vermont in 2007. She is not a live performing musician. In 2007 she built her multitrack recording studio in after graduating from Green Mountain College and spent a year learning sound recording and mixing prior to recording her first album. She is now researching and developing a new playing technique for Gregorian Chant on the Irish wire-strung harp. Enya, Loreena McKennitt, Solesmes chant, New Age and symphonic music and noted wire harpist Ann Heymann have been significant musical influences, along with 19th century French Romantic organ repertoire. For each track on Vox Celeste, she developed either a pencil or a color pencil drawing to accompany it in a glossy 16-page booklet for the CD. She has concentrated on photorealistic drawing her entire adult life, and started seriously in childhood with the intent to pursue a career as a professional artist, but detoured into music instead. Today her artwork serves to illustrate the music she records. She is married to George Matthew Jr. organist of St. Stephen's Episcopal Church, Middlebury, VT and carillonneur, Middlebury College and Norwich University, VT.