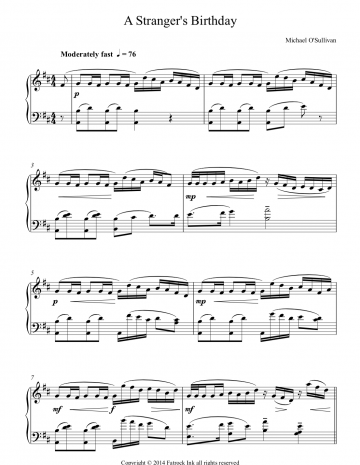 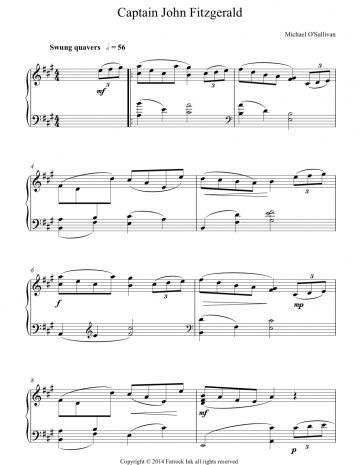 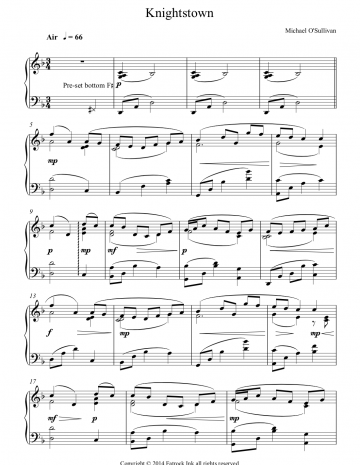 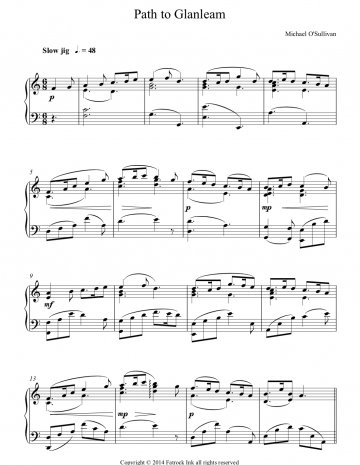 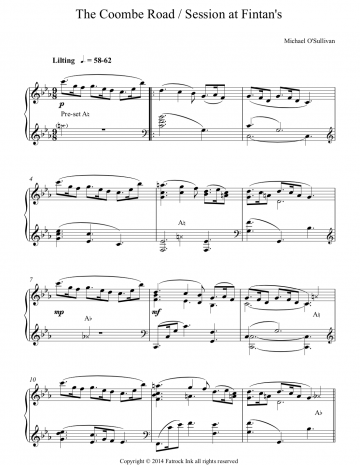 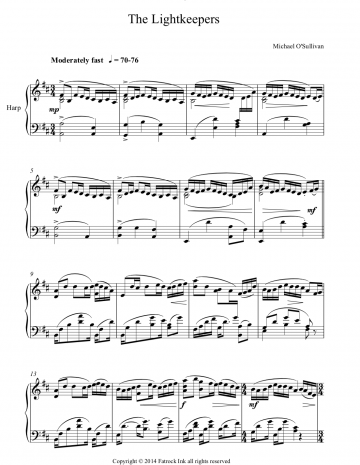 “Valentia Suite” is a collection of six original pieces by Michael O’Sullivan’s for solo lever harp. Says the composer, “The Valentia Suite is a loving and nostalgic tribute to the beautiful hidden gem Valentia Island, in County Kerry, where I have been with family almost every summer since I was born. This is a very personal piece, with each movement focusing on a specific place or event, and the music tries to express the recalled moods and characters these evoke.” The arrangements are available as a complete set, or individually. Scroll down for notes on each movement. Included are:

Add to Wishlist
What are you looking for?
Music for the Practice Challenge!

The Valentia Suite is a loving and nostalgic tribute to the beautiful hidden gem Valentia Island, in County
Kerry. I have been there almost every summer since I was born with family and extended family, so every
place on the island is soaked in memory. This is a very personal piece, with each movement focusing on a
specific place or event, and the music tries to express the recalled moods and characters these evoke.

A communally owned property with a bit of a run down, ‘rough around the edges’ charm, is where all the families congregate each July and August for a long and often blissful summer of laughter and average food. The ‘back garden’ is actually a wild, unkept field, which, when you climb over the wall at the end, leads to another field and then over the rocks to the sea (where the sun sets perfectly on the horizon), with a distant view of the Lighthouse. I have fond childhood memories of us gathering kids together from all over the island to come and play night-time Hide and Seek (with torches – we called it ‘Centurian’) in the fields behind the house. I remember hiding up on the roof once and looking out over the dark field, seeing the periodic flash of the lighthouse about a mile away across the island, and hearing the distant crashing of waves.

Walk for about quarter of a mile up the road past the Lightkeepers’ dwellings and you come to the crossroads. The right path leads to Glan Leam, the left leads to the high road to Chapeltown inland, and the middle prong becomes the Coombe road. Coombe road passes a ruined church and graveyard with forest backdrop on the left, ocean on the right. The road gets steeper, winding and thickly arched by trees on either side. It goes on for what seems like a long time, even though its only about half a mile. It is very quiet, mostly dark, with occasional darts of sunlight and an atmosphere of gloomy mystery, enriched by some spooky tales including one passed down from my grandma and her sisters. At the end of Coombe road, the trees break suddenly and there’s another crossroads. The left prong leads to Geokaun Mountain, lots of ruins and to the fairly desolate yet great cycle ride back around the island. The middle prong leads up to the grotto and the slate quarry, and the right prong begins the walk down to the Lighthouse.

A good few years ago, one of our cousins bought a cottage inland that was idyllic but had no electricity. They invited everyone from our vast extended family over one evening for a magical session by candlelight, going strong into the twilight.

This is quite simply the most beautiful and atmospheric walk down to the equally beautiful eponymous cove. The path has a tragic history–at its end, past the beach, is Glan Leam House which was owned by the Knight of Kerry. It was used as a soup kitchen for the poor during the Famine. Starving peasants used to come over by boat, but it is known that some of them were too weak to reach the House, and they died on the Path to Glan Leam.

One of the highlights of our collective childhood was the annual treasure hunts organized by our folks. We were of that impressionable age where a crinkled ‘treasure-map’ found in the toolshed or under the floorboards (‘aged’ by tea stains and a brief spell in the oven) was the real deal, left by long dead sea-farers and Spanish Armada settlers. The best ‘hoard’ we managed to find was above the grave of “Captain John Fitzgerald, RIP, who died in 1943 – look above his place of rest, to find the hidden treasure-chest!”

A sleepy fishing-village, Knightstown is the first and last thing you see when you approach or depart the island by the little car ferry. I have so many fond and sometimes poignant memories of solitary night-strolls down to the foot past Boston’s and the Coffee Shop, Reidy’s candy-store and Dermot the boatbuilder’s workshop with his dog Cheeko nosing around in the sawdust. I met a girl there once who was only there for a summer and never came back. I know she’s gone now but I always keep a look-out for her anyway.

I like this as a movement title, but it is in fact representative of just one of many affectionately remembered episodes spent in the company of my effortlessly entertaining and infamously untamable cousins, the Cassidy’s.

Be the first to review “Valentia Suite” Cancel reply