"This is the finest work from these two performers I have heard\u2014a sensational album and a must own. Yes, I give it a perfect 10." 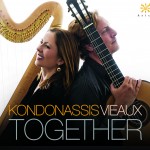 I admit it. I was skeptical. While I love—and often play—recordings of both of these musicians—I was not feeling confident about two plucked instruments played together. Would the sound be too much the same, too bland, or even somehow cancel out any individuality? Would I long for something bowed, blown, or sung to play along? Could my interest be held for an entire hour-plus long disc?

Well, not only was I surprised when my interest was held, but it was keenly done by this most creative and powerful duo.

They are two of the best in the biz—harpist Yolanda Kondonassis and guitarist Jason Vieaux—and their new disc is filled with richness and full-bodied color. Aptly named Together, it’s as though at long last, the two have found each other. And thank goodness our ears have found them too.

They tell us they take the name from the excitement they have at being together and not being able to tell where one starts and the other leaves off. The ring of sound, and the strings themselves, are unique of course. Dare I say there is an almost feminine and masculine character to each that is so beautifully displayed in the interplay of Argentinean composer Máximo Diego Pujol’s Suite májica? The artists’ impeccable feel for rhythmic vitality is heightened in this collection of dances. Their ability to keep the conversation flowing, to pick up on what will be said next, to delight in where they are the same and where they differ, is all on display. Kondonassis’ and Vieaux’s playing is indeed magic.

The instrumental characters become more pronounced in Xavier Montsalvatge’s Fantasia with glissandi and flamenco techniques setting up music more about atmosphere than destination. With the motivation behind creating this album an extension of a love of their musical compatibility, this piece is like looking inside the workings of the artists’ minds. What inspires? Where do ideas come from? How do you know what the composer wants? There is a symbiosis in this performance when you almost hear the musical calculation being made, and it is far more than the sum of its two parts.

Gary Schocker is a name well known to flutists—and former flutists! Perhaps what is most impressive was Schocker’s taking up harp several years ago to discover, among many things, how to write for it. I wrote a review of a lovely CD of his music Garden in Harp a few years back. In this piece, Hypnotized, written for Kondonassis and Vieaux he builds the work around a specific aspect of the soundscape, one used only by the guitarist: vibrato. A conversation started in the Pujol continues, but with the accentuation on this tactile quality, one that is the very basis for the instruments’ unique quality. While almost a scientific look under the microscope, the piece is intimate and played with joy in discovery.

The work that brought this marvelous duo together is Alan Hovhaness’ sonata Spirit of Trees. Kondonassis has recorded this work before. There is something less precious in this rendition, and I like it. Hovhaness was a man equally fascinated by the heavens as he was with music in all its manifestations on earth. The work is spiritual, meditative, and ancient-sounding, with a rhythm all its own—like breathing as one walks the labyrinth. There is stillness, but it pulses. We feel grounded and alive.

Keith Fitch is an American composer whose works are played by major ensembles. Knock on Wood sets out to contrast the resonant with the articulate using surprisingly less wood knocking than its title suggests. While the sonorities explored fascinate, this piece worked the least well for me, its repetitive motif feeling constrained. It might prove a perfect piece in a live setting, but recorded it was tiresome. That being said, the performance was superb.

This is the finest work from these two performers I have heard—a sensational album and a must own. Yes, I give it a perfect 10.