"You are free to create your own storyline, and in the capable hands of these two musicians, that should be easy work." 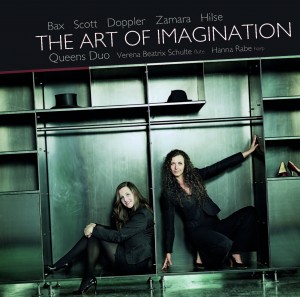 The Art of Imagination

Queens Duo—German harpist, Hanna Rabe and flutist Verena Beatrix Schulte—quotes Einstein on its new album The Art of Imagination: “Logic will get you from A to B. Imagination will take you everywhere.” And it is unquestionably so in this glorious album. The spirit of imagination is the guiding force not only in repertoire choice, but also for expression, color, and nuance.

The CD begins with a suite by an all but unknown composer today, so obscure that no one seems to know for sure his first name, so we must be satisfied with just a first initial. The dreamy, coquettish suite by B. Hilse seems to have been created for the Queens Duo, or were they made to play this music? Either way, one thing historians agree upon was that Hilse provided music for the live orchestras that performed during the silent film era. You are free to create your own storyline, and in the capable hands of these two musicians, that should be easy work. It is a glorious find.

Fantasy and the “painting” of images through the use of sound is the theme running through the recording. Arnold Bax found life often dull and escaped into Celtic mythology. An Irishman wannabe, he even penned his own prose and verse under the pseudonym Dermot O’Byrne. With his music, he fully enters a magical otherworld. Opening with a jig that you could swear was a folksong, he moves to a plaintive recitative sung from a lonely crag in the mist. The story ends in a cascade of glissandi and a joyous rhythmic motive.

While Bax whets our appetite for a scene only imagined, Franz Doppler riffs on the reigning opera of his day as principal flutist of the Vienna Court Opera, which would later become the State Opera. Few can hum a tune from Casilda by the flowery-named Ernst II Duke of Saxe-Coburg and Gotha, and fewer companies still are going to set the world on fire restaging this hit, but as a virtuosic show-off vehicle, it has just the enthusiasts in the Queens Duo. They play with refinement, grandiosity, and that insouciant air of those totally at home in this genre. Can you say campy? But just as in comedy, timing and spot-on technique give us the impression of spontaneity.

Rabe and Schulte met while ex-pats in London and have associated their development with Britain, hence their name. So revisiting England with the Sonata for Flute and Harp by living composer and saxophonist Andy Scott fits right into the album’s arc. Pulsating and driving, the first movement “freely, with energy” echoes the anything-goes spirit of Ennio Morricone’s spaghetti western film scores, and this holds even in the slow and plaintive inner movement, a nostalgic entr’acte. The final movement moves away from the Wild West to dabble in the more exotic flavor of Eastern Europe. The duo is most successful in lyrical passages, with less clarity when things become more complex, though I found the percussive effects in the harp especially exciting.

This is overall a wonderful disc that introduces the listener to new repertoire played at a high standard.