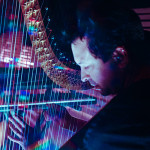 Tom Moth has been playing the harp since he was 6 years old. His teachers include Hugh Webb and Sioned Williams. Read more at
tommoth.co.uk.

You never know where your next gig will come from. A chance meeting in a South London parking garage in the spring of 2007 lead to me recording some harp parts on a few demos with this new English indie rock band called Florence + the Machine, and about a year later I was invited to play some live shows as part of the band. Ten years later, I’ve played countless shows, and the band has reached worldwide fame. We are currently on tour in the U.S.—the first leg of a world tour to promote the band’s latest album High As Hope. It’s hard to believe that in the last decade we’ve gone from playing clubs, dives, and toilet venues (where each band member has roughly five square inches of stage space, if they’re lucky) to amphitheaters and arenas, with proper stage sets and a huge road crew. So on this tour, I’m a little bit nostalgic about how far we’ve come. I’m trying to slow down, take in the experience, and enjoy the ride.