“A well-plotted mix of old and new, though likely not at all familiar to most of us, and played with some of the most bewitching sounds. A revelation in where the Debussy trio can take a group.” 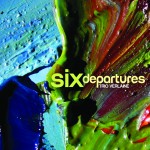 Do I have an unfair bias reviewing a harp CD that includes a flutist? Might your humble reviewer—a flute player from the past—be hyper-critical? Let’s just put things in perspective. As Trio Verlaine’s new CD Six Departures awaited my review, I played it numerous times on air, maybe too numerous. It is so beautifully balanced, contains new music for trio (at least to my ears), and is filled with such marvelous musicianship, that I could not hold myself back.

Many a trio is formed to play Debussy’s Trio, and then find they want and need to make more music together. Trio Verlaine kept the fires burning and has successfully brought new music into the fold that is worth learning and performing.

Arnold Bax’s Elegiac Trio begins the disc with the harp gently crashing waves along a lonely shore. A man who used the pseudonym Dermot O’Byrne to write romantic Irish novels, Bax was fascinated with the sounds of the Emerald Isle. His use of flute and harp is obvious, the viola gives this memoriam to those lost in the Easter Uprising of 1916 depth and profundity. Violist David Harding’s tone is astonishingly rich, matched by Lorna McGhee who never allows her sound to become harsh even as she reaches to the upper register of the flute. Harpist Heidi Krutzen brings out just the right qualities to tie the bow on a ravishing color.

That’s exactly it—exactly what hooks you throughout this entire disc—the color. There is never a moment when you feel the instruments are disconnected. Clearly they are distinct sounds, but if you bear with me as I make up a new word, it’s as though they are one instrument, a vioflarp. The quality of ensemble is so complete. This becomes most evident on Jeffrey Cotton’s Six Departures. In writing this piece commissioned for the trio, Cotton clearly has their sound in mind. They can play a pianissimo that will make you weep, while never losing quality and a forte that screams, but again, is full and pregnant with meaning. The Departures come from the land of sunshine, but look back in time to Expressionist Germany with dances given just the jagged punchy edge of an open Pandora’s box.

R. Murray Schaffer is a composer as well as an environmentalist and founder of “acoustic ecology.” His Trio pulses with life, verdant and green, and movement that’s organic and as primeval as a virgin forest in the far Northwest. Trio Verlaine sings splendidly together and also finds the lightness of footing for the sassy finale “Rhythmic.”

The final work by Jolivet returns the ear to the more familiar French version of flute/harp/viola music, but with a twist. Jolivet traveled through North Africa to rediscover the magic qualities of music and places incantation forefront as this music’s purpose. Trio Verlaine unabashedly enters the realm of the mysterious in his Petite Suite. The result is otherworldly, haunting, and mesmerizing.

I am not surprised to learn these three musicians who make up Trio Verlaine are deeper friends than simply chamber music partners, but it must be lonely living across the continent from one another. Let’s hope they keep making music of this spectacular quality. •