"When Rachel plays, I feel taken back in time to that breathless moment when this gentle giant\u2019s range of possibilities was first discovered." 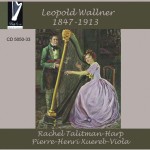 With the unrest in Ukraine in the news, there doesn’t seem to be a better time for a closer look at the music of this region of the world. Ukrainian Leopold Wallner grew up surrounded by musicians, as his father was a music publisher in Kiev. He was the godson of Franz Liszt and left his homeland at a fairly young age to study in Brussels. But when his father died unexpectedly, Wallner was forced to give up his studies and work.

He was a man with music in his ears but no real formal training, likely staying one step ahead of his students as he absorbed each week’s lesson.

His music is tinged with the romanticism of both Liszt and Chopin, but we also hear a startling Eastern quality. The haunting and longing sound of his music seems ideal for the richness of the viola, and in his music the viola sings, but with a light-heartedness that is reminiscent of Berlioz’s “Harold in Italy.”

While the viola is in the forefront, holding the emotional weight of the repertoire, Wallner’s writing for harp is advanced for its time. His friendships inspired a deep exploration of individual instruments, and in the case of the harp the friend was Jean Risler, a professor of chromatic harp in Belgium as well as France. He was the harpist who helped move along not only the patent for the chromatic harp, but the stunning Danses by Debussy that bear an inscription to one of Risler’s star pupils.

Ironically, the chromatic harp caught on among students thanks largely to none other than Leopold Wallner, who wrote sets of studies and etudes to aid in learning and accepting this new and likely daunting instrument.

Rachel Talitman’s first solo on the disc has a funny title—Mazurka de Concert—that blends the sophistication of French music-making at the turn of the 20th century with more popular dance styles. Rachel plays with stylish elegance, her expression lending breath to this potentially routine conservatory work.

Followed by a touchingly simple lullaby, Rachel’s partner Pierre-Henri Xuereb plays with a ravishingly hypnotic tone, though I found he sometimes lacked grounding, his bow often interrupting the musical line.

Instantly changing gears, the harp-only Elegie seemed to want to dip its toe ever so gently into Debussy-like waters. While he moves the music along as on an overgrown path at twilight, Wallner makes the modern-day pedal harpist work. The slightly percussive quality of the plethora of pedal changes along with the piece’s telegraphed chromaticism added to the gauzy mystery. When Rachel plays, I feel taken back in time to that breathless moment when this gentle giant’s range of possibilities was first discovered. Rachel plays deliberately, taking nothing for granted, with that quality we all search for—that this is the very first moment the music has been heard.