"…it’s a journey you’ll want to take over and over." 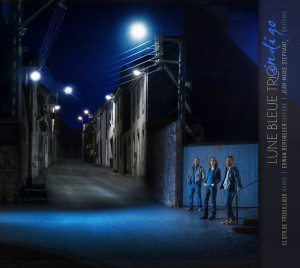 Nothing brightens up a gloomy, gray, cold winter afternoon than the jazzy, rock-infused mellowness of Lune Bleue Trio. When a guitar is electrified, what gets enhanced are its metal strings—able to play nearly legato lines of melody with twangy buzzy crescendos added as the player desired. The amplified harp goes in the opposite direction, retaining an ancientness, as well as a quintessential ephemeral quality, its precious ring and decay intact.

This is the sound world that provides the canvas for the young French harpist Clotilde Trouillaud. Stir in a bit of percussion, strategically placed, and you’ll hear one of the most unusual harp ensembles you’re likely to come across. In its first collaborative disc, Indigo, not one moment is neglected, and if you give yourself away fully, it’s a journey you’ll want to take over and over.

The CD begins with the title track; a baleful ostinato played by guitarist Erwan Bérengue  that eases into Jean-Marie Stephen’s light groove before introducing us to the celtic harp, played by a standing Clotilde. It’s only a matter of a few jams before the trio breaks out into hallmark rock styling, each voice improvising. Whatever you had in mind for how a harp can sound is jettisoned from the start.

Most of the tracks are originals, including “Valcyone,” the bi-horned fantasy creature. The tune is simple, repeated, embellished, and slowly you find yourself drawn into its hypnotic spell. Like a spiritual incantation, the formula is straightforward, and yet it’s the mix of timbres, the expert shifting of color, and variation that make this music work.

Some of the most beautiful outcomes are Clothilde’s works that have been arranged by the trio, like the cinematic “Lumiere de Marbre.” For this piece you’ll need to picture the drama of a live concert with Lune Bleue, a group that puts great energy into lighting and stagecraft, as well as the look and feel of very physical instrumentalists at work. Similarly in “Reflets epices,” the ensemble favors an improvisatory style that feeds off each other’s last utterance. At no time do things feel controlled or boxed in. This music is free and very much in the moment.

The group is equally powerful on the arrangements, especially the airy “Musette” by Celtic harpist Ralf Kleeman. Clothilde’s playing is so full of longing, you’ll want to reach into the speakers and take her into your arms, for comfort or maybe more aptly, to share in this lonely waltz. It is absolutely riveting. Jean-Marie’s “Milo’s Dream” allows us to revel in a cadence slowly building, seemingly from afar, perhaps vaguely remembered in a dream.