"…a splendid marriage of voice with harp…" 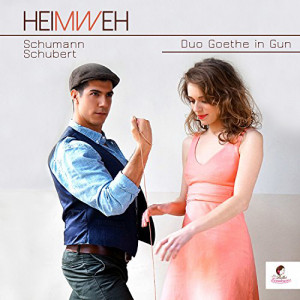 For lovers of lieder, the disc from Duo Goethe in Gun is an absolute revelation. Heimweh, or homesickness, is a splendid marriage of voice with harp, that in transcribing works for voice and piano, digs deeper into the intentions of the composer, discovering an entirely new color palette and greater intimacy possessing an immediacy as though the songs—and emotions—were only just being expressed the moment the melodies left them and took purchase in the ether and our grateful ears.

Swiss Baritone Sydney Fierro is making a career in opera, but he has a predilection for the unusual teaming up with the electronic music group Symphologic to improvise on Schubert’s Winterreisse. He joined French harpist Chloé Ducray for one of the most heartfelt and musically challenging song cycles in the literature, Robert Schumann’s Dichterliebe, an outpouring of love and angst set to poems by a poet both he and his wife knew, Heinrich Heine. While this was a time of celebration of being together, for many years, Clara’s father did all he could to keep them apart. The poetry is personal in telling the story of these difficult times.

And for the artists, the emotions must be expressed quickly, with one song a bit over four minutes and another clocking at 38 seconds. This requires flexibility and focus to bring a listener through the entire series, in a live setting for sure, but equally in a recorded setting, where in this case, Goethe in Gun paces things beautifully, creating an illusion of just a hair’s breath before the new mood grabbed the poet’s attention, perfectly mimicking the ambivalence and heightened emotion of intense love.

Fierro and Ducray get to work right away, explaining that their project is “une rencontre impromptu,” a kind of marrying of sound worlds. It’s the harp that sets the tone for the cycle, dreamy, improvisatory, rich in tone that matches the chocolaty opulence of Fierro’s high baritone. This is most evident when he sings “Many flowers spring up from my tears, and a nightingale choir from my sighs” as she weaves a kind of net of sound for the music to relax into and feel safe expressing such grief.

Followed by “I used to love the rose, lily, dove and sun, joyfully” the two leap hand-in-hand through a meadow in full sun. The ease with which the harp can separate each chord, keeping it light and forward moving is something I imagine a pianist would like to imitate. Most effective is when the harp takes over where the words end as in “In the Rhine, in the sacred stream” when the harp appears to simply carry on with conviction where the voice can no longer speak. It’s a riveting moment.

Equally powerful is “I wept in my dream, for I dreamt you were in your grave,” the most recitative-like of the songs. The harp punctuates each line with simple chords, but it feels more a call and response with each feeling the deepest pathos. Unfortunately, Fierro’s voice is sometimes uneven and uncontrolled.

Appropriate to the ensemble—and the inspiration—is the short song cycle by Schubert of Goethe’s Harpists Songs. Dramatic and expressive, it pulls every emotion out of the musicians. With seemingly straightforward broken chords, Ducray traces the arc of the line with sensitivity, always fully present. The bonus for me is the tiny solo Romance by Clara Schumann, hearing it as I have never imagined it, with a sensitivity and subtly not often heard.