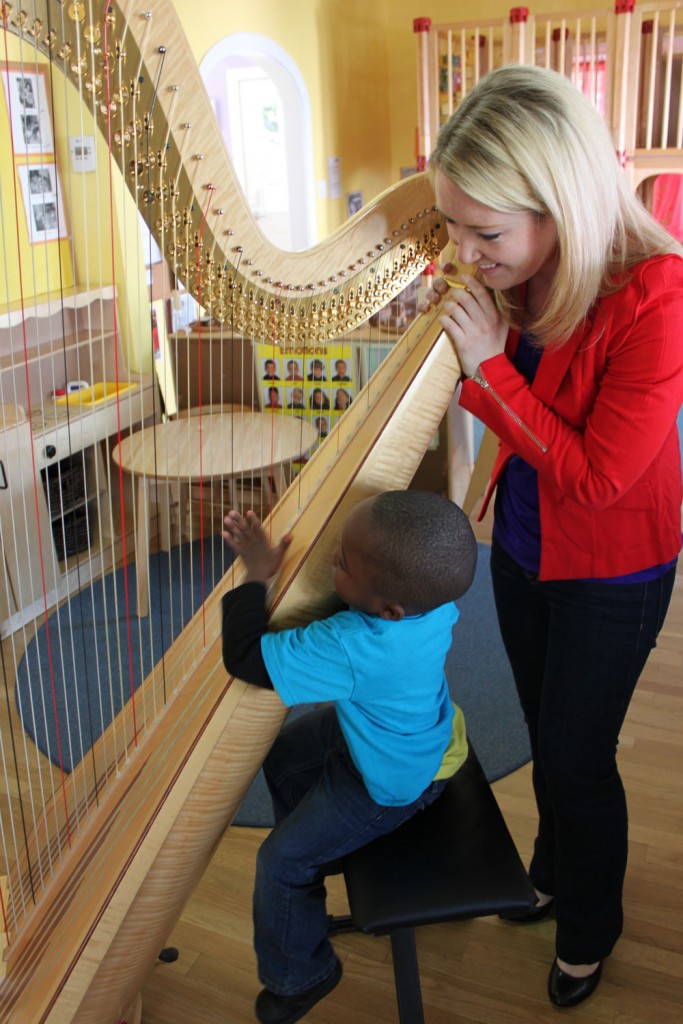 Meghan Caulkett’s 47 Strings project brings harp performances to homeless shelters, schools, and nursing homes that are underserved in Houston. Caulkett was also the first harpist to work with the Arts in Medicine program at Texas Children’s Cancer Center, through waiting room and inpatient performances.

Several years ago, I showed up to play at a nursing home only to discover that they had advertised me as a “cellist.” To this day, I am mystified. I feature the word harp in both my email address and website title. “Harpist” is the first word of my bio. Come to think of it, I have never so much as touched a cello.

I wheeled my harp into a room of sorely disappointed people—including a former professional cellist who had eagerly anticipated the afternoon’s cello performance. I explained to the crowd that while not a cellist, I was nonetheless honored to be there and excited to play. Some people bought it, but a clear contingent remained unconvinced. The harp served as a poor substitute for their cello expectations.

It would be easy to get indignant. Here I was, doing this concert because I wanted to give back to my community. And now, despite my best efforts, my audience was disappointed because I didn’t play cello.

These sorts of surprises are the tip of the iceberg with music outreach and community engagement projects. Most musicians approach community engagement with the absolute best of intentions. You are eager to give back to the local community and excited to make a difference. Then, you bump up against reality. Baffling miscommunications occur—like my supposed cello debut. Harpists used to hearing back about gigs in under 24 hours can be discouraged by a nonprofit’s five-week response time. What? I’m offering to help get a grant to provide music to kids in this low-income, after-school program. It will be totally free for them! And they don’t even respond? Harpists who work tirelessly to launch a free concert series at a local community center can easily burn out when, after months of work, only two people show up in the audience. Sometimes, it can just feel overwhelming. You want to launch a harp program in your local schools, but you may not even know where to start. And when you do finally gain some traction, you find so much red tape that you could use it to wrap pedal felts on a hundred harps with more left to spare.

There are some great tools that have already been developed for community engagement, buried in the depths of academia. But don’t worry; you don’t have to wade through a pile of dense research. We’ve curated the resources out there so you don’t have to. Whether you want to run a music program through a homeless shelter, or create a concert series to air on your local access television station, or begin a harp program in the public schools, you will need the enthusiastic support of community partners. Community partners are the people and organizations that your project will affect, whether that effect is big or small. Here are the seven top strategies for cultivating that support: