"Sara Cutler plays with grace, tenderness, and a joyously light touch that conjures an English cathedral, lit only by candles…" 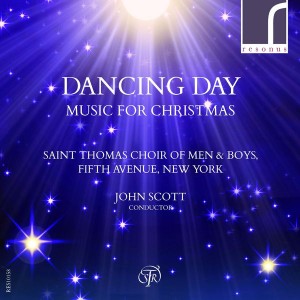 It was a warm August morning in 2014 when organist and choral director John Scott, having just returned from a successful European recital tour, lay down to rest. He was tired and mentioned he simply wasn’t feeling so well. Tragically, he slipped away in his sleep, dying far too young and with far too much left to offer the music world. Scott’s life touched millions of people. He led the choirs of St. Paul’s Cathedral in London and in New York City at St. Thomas Church. It’s through concerts, tours, numerous recordings, and radio broadcasts that he was deservedly regarded as one of the world’s treasured musicians. Dancing Day, Music for Christmas is his valedictory recording with the Choir of Men and Boys at St. Thomas Fifth Avenue featuring harpist Sara Cutler.

When Benjamin Britten was in the United States, Carlos Salzedo asked the British composer for a harp concerto. It was our great fortune that Britten set off to work with not just manuals on composing for the harp, but a copy of The English Galaxy of Shorter Poems. Britten changed course to write one of the masterpieces of the 20th century, A Ceremony of Carols. Every harpist knows her part in the work for treble voices and harp is not by any means merely an accompaniment, rather it’s a daunting solo part in its own right. Sara Cutler plays with grace, tenderness, and a joyously light touch that conjures an English cathedral, lit only by candles, the air heavy with the scent of balsam. Britten was not specific about the scoring, variously describing it as children’s and women’s voices. There is absolute magic—if imprecision—in the use of boys for trebles, though the high notes in “Balulalow,” sung solo with all the innocence of youth, is worth the cost of the disc. Ms. Cutler sounds like an angel, her tone, creamy and pliable.

John Rutter was requested by a harpist to write a work to act as companion—or even, heaven forefend, a replacement—of the Britten. Rutter’s greatest gift is in the resetting of well-known carols, and his writing for harp is no less artful. In “Dancing Day” the harpist sets the mood for the coming carols. She particularly shines in this moment. Yes, a solo, but one that anticipates the coming songs when she will slip further into the role as a shepherd of sorts for young voices. Ms. Cutler conveys the drama effortlessly, commanding center stage but with spot-on pacing that’s at all times gentle. This counts when she plays with the boys, keeping the lively feel and forward motion even when the tempo threatens to bog down, a kind of sleight-of-hand not easy to perform.

The works for men, boys, and organ are a stunning contrast and bring this hour of music-making that might have preceded Christmas eve mass, full circle. The bonus of Benjamin’s Britten’s “A New Year Carol” will stop you in your tracks. While the sonic properties of a boys choir may be an acquired taste, this is some of the finest; in tune, sung with sparkle, and led by a man who clearly loved his work and the gift he gave us.