"What a joy it is for me to come across this new trio of harp concertos recorded with stunning taste and expansive refinement." 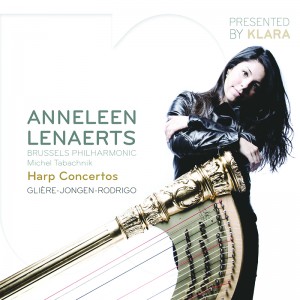 As a classical DJ, my harp allocation on air is often confined to the hits: Handel and Debussy with a side of Mozart, more from the Impressionists, and a few salon pieces slipped in with the feeling that, sadly, we’re just filling time. What a joy it is, then, for me to come across this new trio of harp concertos recorded with stunning taste and expansive refinement.

Belgian harpist Anneleen Lenaerts is principal of the Vienna Philharmonic and Vienna State Opera. She told Harp Column in a recent interview that in her first season she learned 45 new operas, and then performed them, without rehearsal. Her playing is nothing short of glorious. It shimmers and glows, the technical passages produced with élan and somehow magically emanating out of the texture. She is a soloist without a doubt, but gives the impression she is part of the team.

The recording of this disc was awarded her as part of the 2011 Klara Award, which honored Ms. Lenaerts as a “Young Hopeful.” The hope being, I would guess, that this young woman grabs the trajectory her star is rising on and enjoys the ride.

The most exciting find on the disc is one by Ms. Lenaerts’ countryman, Joseph Jongen. She calls his concerto “splendid” and the “most particular of them all.” And what an argument she makes for this unusual two movement piece. Primarily known today for his works for organ, Jongen was a gifted harpist and wrote this work late in life during the Second World War. The fluency of Debussy is obvious, and yet the harmony and lyricism belong to an earlier time. The light orchestration allows the harp to float, even when the notes cascade and tumble forth. Ms. Lenaerts’ gloriously fluid and elastic technique is a miracle and never anxious. She rather conjures an angelic cherub resting on a cloud, though a curious and witty one as evinced in the cadenza that opens the second movement. It hints at an era a half century previous, and yet—with a wink—hopping from key to key. If for no other reason than the Jongen so wonderfully presented, this CD should be a part of your collection.

The album opens with Reinhold Glière’s harp concerto. While it doesn’t push the bounds of harp technique—nor compositional technique—it is a gem of refreshing melody, perfectly orchestrated and grant-ing the soloist plenty of room for expression. Glière was not a harpist and so sought the assistance of his harp colleague, the principal of the Bolshoi, Ksenia Erdeli—one of the first to perform as a soloist outside the orchestra. He received likely more guidance than expected and offered to add her name as co-composer, which she declined. Perhaps within this composer-soloist relationship lies the secret to Ms. Lenaerts’ full realization of this music, as though she were born to play it. Glière was writing for someone with so many of the same characteristics: an orchestral principal who spends most evenings in a pit accompanying the goings on onstage, but simultaneously longs for the stage herself. There is a je ne sais quoi of totality in Ms. Lennaerts’ performance as she weaves amongst the grand tapestry of the orchestral colors and solos. It makes for exciting listening and a far fuller experience your standard soloist with orchestra. And, of course, it helps to have such a fabulous orchestra as the Brussels Philharmonic in accompaniment.

The 1940 arrangement of the famous Concerto de Aranjuez by Joaquin Rodrigo offers the chance for the harpist to perhaps discover her inner guitarist. Ms. Lenaerts does this with bewitching effect in the famous “Adagio.”