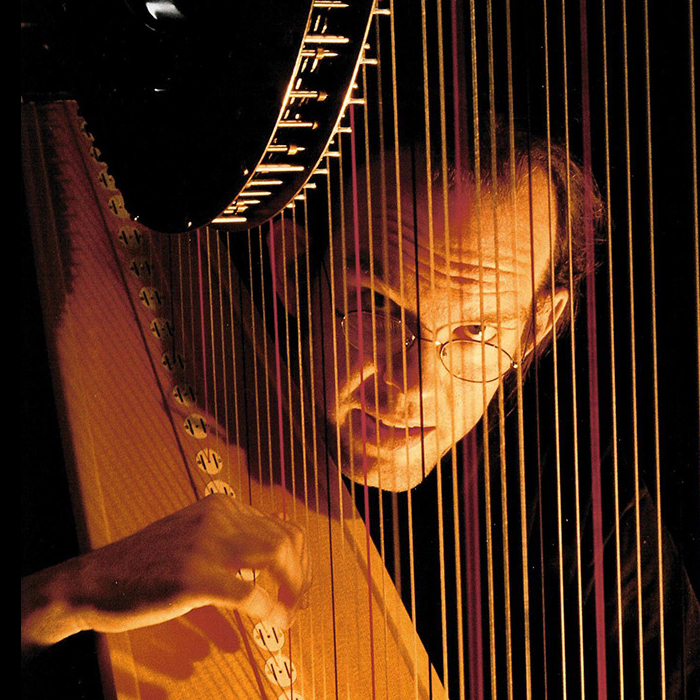 Juilliard-trained Park Stickney is a master at jazz and improvisation on the harp. Currently based in Switzerland, Park concertizes throughout Europe and abroad. In this one-lesson course, Park Stickney teaches how to play his original composition "Lever Mania." In this course Park Stickney teaches advanced jazz theory and improvisational techniques centered around his "sharp pedal method," and we recommend watching the lessons in order. To get the most from this course, you’ll need an understanding of key signatures and enharmonics.

While attempting to live simultaneously on a farm in Switzerland, and in Brooklyn, New York, harpist Park Stickney is constantly in motion, giving concerts throughout Europe and the U.S., solo, or in various combinations including his harp-bass-drums trio “The Lion, the Wolf, and the Donkey” and his harp-flute-percussion trio “The Dada String Quartet”

He’s performed and taught in nearly every harp festival that exists, from Adelaide to Zaragoza, appeared on the French television program “La Boîte à Musique”, performed on the QE2, recorded with the “Crash Test Dummies,” played with John Sebastian (of the Lovin’ Spoonful), made a video with Jonathan Coulton, jammed with young oud students in the West Bank, improvised cadenzas while playing the Mozart Flute & Harp concerto with Regula Küffer, played Wagner as a stowaway deep in the harp section of the Berlin Philharmonic, given concerts in a mine in South Tyrol, in a thermal bath in Switzerland, in a New York McDonalds, in Sri Lanka, Shanghai, Madras, Hong Kong, Moscow, Moldavia… He’s played Broadway pits in NY, toured with the Fantasticks in Japan, and appears regularly on page 97 of Patricia Cornwell’s novel “From Potter’s Field.”

An active teacher, Stickney is the jazz harp tutor at the Royal Academy of Music, London, an assistant-professor at the Conservatoire National Superieur de Lyon, France, and teaches harp improvisation at the Haute Ecole de Musique in Lausanne, Switzerland.

He is also an enthusiastic but spectacularly un-gifted Swiss volunteer fireman.

Stickney holds degrees from the Juilliard School and the University of Arizona, and is an honorary associate of the Royal Academy of Music. He plays the Lyon & Healy electro-acoustic harp, and is inordinately fond of black-cherry yogurt.

Read more about Park on his website at www.harplab.net.