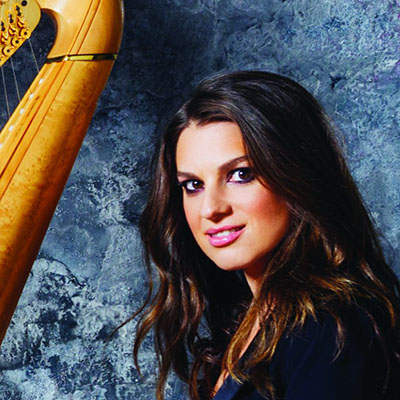 Renowned soloist and chamber musicican Bridget Kibbey uses classical examples to show how to develop a full and relaxed sound on the harp.

“I would love for you to explore J.S. Bach as a vehicle for you to play with phrasing…there’s so much that he’s written that translates beautifully onto the harp.” Technique and Sound with Bridget Kibbey

In this course Bridget Kibbey gives technique tips to build a great sound using examples from the classical repertoire. Also included are tutorials on using the metronome and advanced tuning.

In demand as a soloist and chamber musician alongside today’s top artists, harpist Bridget Kibbey is a recipient of the prestigious Avery Fisher Career Grant, the Classical Recording Foundation’s Young Artist Award, a Salon de Virtuosi Grant, the only harpist to win a position with the Chamber Music Society of Lincoln Center’s Chamber Music Society II, a winner of Concert Artist Guild’s International Competition, Astral Artist Auditions, and Premiere Prix at the Journées de les Harpes Competition in Arles, France.

Ms. Kibbey’s solo performances have been broadcast on NPR’s Performance Today, on New York’s WQXR and Q2 Radio, WNYC’s Soundcheck, WETA’s Front Row Washington, WRTI’s Crossover, and A&E’s Breakfast with the Arts. She has toured and recorded with Dawn Upshaw and Placido Domingo for SONY Records and Deutsche Grammaphon; and, her own solo debut album, Love is Come Again, was named one of the Top Ten Releases by Time Out New York. Bridget is featured annually with the Chamber Music Society of Lincoln Center, the Knights Chamber Orchestra, and Camerata Pacifica. She has appeared as featured soloist and chamber artist at the Bravo!Vail, Santa Fe, Spoleto, Chamber Music Northwest, Bridgehampton, Aspen, Bay Chamber, Pelotas, Savannah Music Festival, Music@Menlo Festivals, among others.

With a passion for expanding the scope and platform of the harp, Bridget spearheads and tours cross-genre collaborations that reignite an ancient instrument. This season Bridget presents J.S. Bach’s most iconic keyboard works adapted on the harp alongside the Sebastians, “New York’s leading early music ensemble (New York Times).” She travels across the country with a special appearance at the Colombian Embassy with Chalaca, a new trio exploring the cross-pollination of folk music in South America, alongside Colombian clarinetist Benito Meza, and percussionist Samuel Torres.